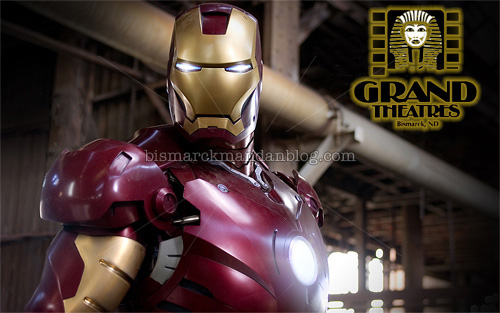 Some coworkers and I took the afternoon off today and went to the opening matinee of Iron Man at the luxurious Grand Theater in north Bismarck. Wow.

First off, this movie was so amazing and so…well, COOL that I was ready to pre-order the DVD before I walked out of the theater. I’d also like to give some props to the Grand Theater. The place is a true movie house, and the way its decorated an operated pay a suitable tribute to movie history. The place is well kept, attractively designed, and those giant curved screens are the only way to see a movie like Iron Man. I know, I like to complain about spending eight bucks for a movie (six for today’s matinee) but if I’m going to spend eight bucks, it’s going to be at the Grand. No place else comes close.

If you haven’t seen this movie yet, and chances are you haven’t since it just opened, GO. The characters are awesome, Jeff Bridges is bald, and I think it holds true to the comic book story. I haven’t collected comics since the 90s; I mostly bought what I liked to read, but I have a lot of extremely valuable comics boarded, bagged, and sealed in a safe place. From what I remember of Iron Man comics, this movie does it justice. I’m sure there will be a comic geek out there to disagree, but I don’t care. This movie is at the top of my list, and I want to see it again.

By the way, did you know that this movie has a tenuous link to Bismarck-Mandan? Yes, it’s true. One of the characters, a reporter who also has a make-out scene with Robert Downey that I won’t let my kids (or myself) watch, is played by Leslie Bibb. While she apparently never lived here, IMDB claims that she was born in Bismarck. What a small world, eh?