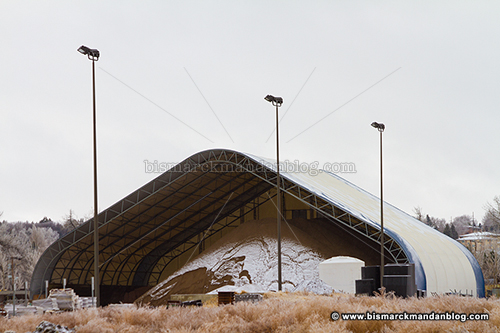 On Friday, a long-anticipated storm began to roll across North Dakota from the west. By mid-day no travel was advised in the west as freezing rain and icy conditions made travel very treacherous. It’s not as if we couldn’t see last night’s ice-fest coming.

Imagine my surprise at 5 o’clock when the city’s streets, rapidly turning into an ice skating rink as the temperature dropped, were completely devoid of sand. I drove carefully across town via some of the city’s busiest intersections, but didn’t see any sand spread around.

That’s ironic, because during the summer the city of Bismarck has no problem spreading acres of chip-seal gravel, much of it unmarked, to coat the roads while simultaneously maiming motorcyclists caught unaware. While they’re quite liberal with the pea gravel, each year we end up with a day or so of fender benders that could have been avoided before someone snaps to and orders out the spreader trucks.

This year is no different. In what was perhaps one of the most easily foreseeable freezing rain and ice events, Bismarck residents were forced to tip-toe and white-knuckle their way home on streets that could have been sanded in advance. Once the rain began to fall early in the day, with cold weather approaching and hundreds of miles of iced-up roads in its wake, the city of Bismarck apparently did NOTHING.

By the way, you may have noticed from all the out of state license plates that many drivers on North Dakota roads this year are not North Dakotans. Many come from southern states where they apparently can’t even drive in RAIN, much less snow or glare ice. Now they’re getting a taste of winter and we’re out there playing bumper cars with ’em. I wonder if anyone considered that before opting to wait with winter road preparations?

Where’s the sand? Well, don’t worry, folks – it’s sitting safe and sound at the Public Works building. On an errand today I drove past and grabbed the camera to illustrate that as far as sand goes, we’ve got plenty. Unfortunately, even as they begin to load trucks today, it’s going to be spread on Bismarck’s roads at least a day late.

If the city put as much effort into sanding and plowing winter roads in a timely manner as they did trying to soak us for a $90 million Civic Center addition, perhaps we wouldn’t have such dangerous conditions when we’re simply trying to get to/from work and home safely.