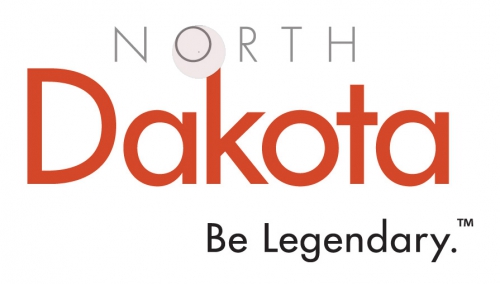 The wordmark is simply three versions of the font Futura. The lavender circle is the brush it takes to alter the k.

I’m not sure what about this wordmark says, “North Dakota” aside from the text.

Here’s the old wordmark.  That was a fine piece of work.  Doesn’t it have motion and energy to it?  Doesn’t it fit perfectly with the dynamic Josh Duhamel ad demonstrating the kind of “legendary” experience you can enjoy when you come to North Dakota?  Yup.

I struggle to figure out the new wordmark   Three different versions of the Futura font, arranged in a jumble…but what is it trying to convey?

Now make it smaller.  You know what the eyes lose first? North.  Remember, there are two Dakotas out there.

I noticed that the Tourism Division is still using the old wordmark on their website.

If you want a great comparison of old vs. new, check out my friend Jamie’s post on it.  He’s writing on it from the point of view of a designer, which I am not.

If you want a great exposition of why the “Be Legendary” slogan is misguided, check out my friend Julie’s post on that.  In other words, our state is Legendary, not its visitors.  But read the post.

Designer Ben Brick also makes the point that there needs to be some design function involved in this sort of process, and it doesn’t look like he can find any, either.

Branding is a huge deal, not the sort of thing you want to get wrong.  I don’t know what process resulted in the wordmark above, but I don’t think it’s going to accomplish what they want it to achieve.

2 thoughts on “It took “Legendary” audacity to choose this logo”