A coworker and I were videotaping in a house today for an upcoming television commercial and website. Actually, he was videotaping and I was doing still photography. The bathroom area in which we were shooting was a little cramped, so I got out of the way while he got his lights set and did his video work. Since I couldn’t use the camera I brought from work in the bathroom, I pointed my own camera out the back window of the house into the backyard to see what kind of birds and stuff were hanging out. 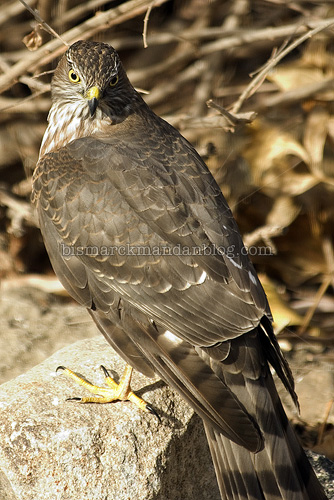 While I was peeping through the viewfinder, a very large blur flew past. I jerked back, looked through the window, then immediately went back to the camera. A large hawk had swooped in to do some hunting among the little birds! 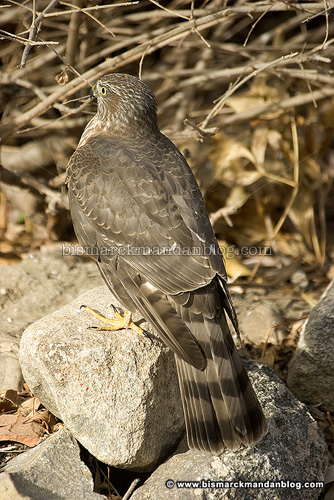 I grabbed a few different shots of this hawk as he stood on the rock, mere feet away through the glass. The sparrows had climbed far into the thick branches, depriving him of lunch…so he took off again. Then it was my turn to aim the lights and do my photography of the home’s interior and wrap up the shoot.

This blog, if you go back through the pages, is filled with crazy things that I’d never have caught if I hadn’t always had my camera handy. For instance, there’s my Saturday morning middle-of-the-road snapping turtle adventure; the Bismarck Fire Department intersection hose-down; or the Lewis & Clark bubble bath. There are many more, but you get the idea. It makes the work of lugging the camera around worthwhile!