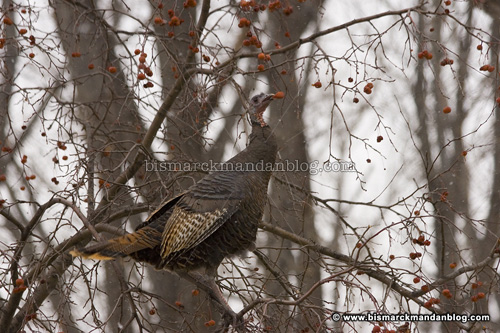 Probably not the same as this turkey, who was having a feast of its own. One blessing about being southwest of Bismarck is all the wildlife. There are the herons that drive me nuts when I try to get close enough to photograph them; the turtles that do the same; the deer and pheasants that don’t seem too worried about my presence; and the turkeys that act like they own the place. This would be one of the latter.

This particular flock was just hanging out, with only one ambitious bird willing to flutter up into the trees for the really good eatin’. The rest were content to just peck around in the yard. Then they noticed some crazy guy with a telephoto lens trying to get a better angle. That resulted in a mass turkey exodus. Having spoiled their dinner, I took off to enjoy one of my own, provided by my mom! Since we were barely home from the hospital (due to the birth of little Jonathan), she was gracious enough to provide us with an amazing Thanksgiving dinner while my wife took care of the newborn.

I know it’s December, and Thanksgiving day is a distant memory with the Christmas season in full swing, but I caught myself thinking about the sight of such a dorky bird as it lurched itself up into the tree. That’s a story that begs to be shared!