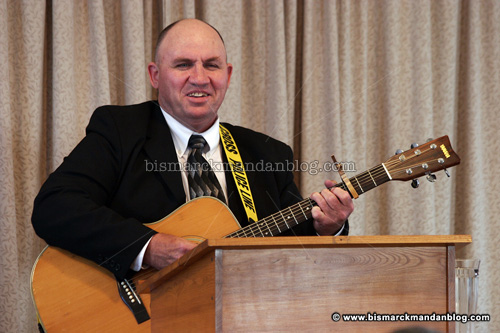 Last week our church held our annual Missions Conference. Featured were three visiting missionaries, each one remarkable in his own way. One of them, Mike Saunders had been here before…and I was eagerly awaiting his return.

“Brother Mike” lived a hard-knock life before he accepted Christ, and is now a missionary to the prisons in his home state of Texas. He had a remarkable testimony the last time he was here, but had another equally remarkable one this time around. Mike’s lucky to be alive.

Mike was t-boned on his motorcycle by a woman who ran a red light on her SUV. She fled the scene but was caught, and was actually hopping mad about the damage to the front of her truck. Mike wasn’t so lucky. He lost a portion of one leg and now has a prosthesis. He also lost his sight in one eye for a while, had numerous life-threatening internal injuries, and for a while the word we received was that he would no longer be able to play the guitar. Our prayers were answered, however; Mike survived his ordeal, has recovered from his injuries and regained his sight, and can still play the guitar in the prisons.

Missionaries visit our church from time to time, and naturally certain people take to certain missionaries for whatever reason. In my case I suppose a lot of it is as a motorcyclist…I’ve ridden the “flashy-bus” a few times in my years of riding and roadracing. Thankfully my injuries were never as severe as those of Brother Mike. 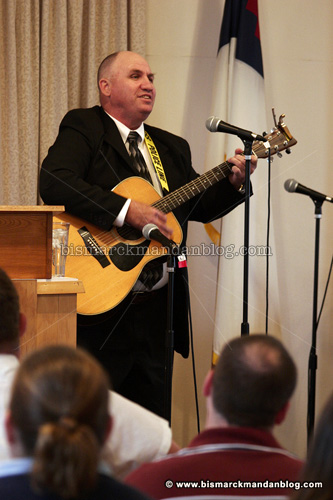 I have a copy of his CD, “Brother Mike Sings”, which I have ripped to my iPod. He sells them himself to support his ministry, and our church bookstore also keeps some on hand. I believe they cost six or seven dollars, and I may be able to hook you up with one if you’re interested. Just use the “Contact Me” link at the top of the page if you’d like more information. I encoded some samples for you.

This is an excerpt from “The Deacons Ain’t Voted On It Yet”, one of my personal favorites. His music is often quite funny, and this is one of the more hilarious ones:

One of my other favorites is “Where Have All the Real Men Gone?” so I put a portion of it below:


Missionaries such as Mike Saunders are quite a treat. Like I said, some folks tend to take a liking to certain missionaries and/or their families for whatever reason. We look forward to having Mike Saunders back in the future and to getting him a chance to minister to guys in local prisons here. He’s assured me he won’t be trying to borrow one of my motorcycles while he’s here!