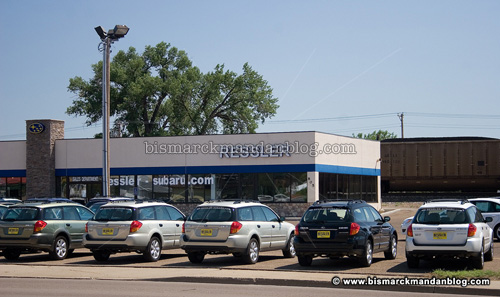 I’ll have to recommend that if you’re looking for a new vehicle, look elsewhere than in Mandan. This weekend a queer* pride event was held north of Bismarck at Eagle Park. I did a Google search to see what was up with this “Pride Fest”, which is right by a friend’s house, and found this sponsorship announcement for a past event: 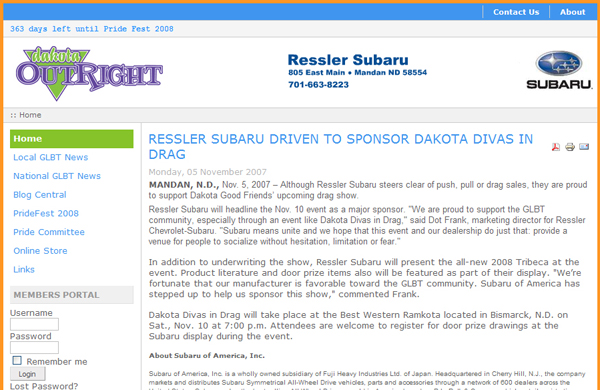 According to this page on one of the queer* activist websites,

Ressler Subaru will headline the Nov. 10 event as a major sponsor. “We are proud to support the GLBT community, especially through an event like Dakota Divas in Drag,” said Dot Frank, marketing director for Ressler Chevrolet-Subaru. “Subaru means unite and we hope that this event and our dealership do just that: provide a venue for people to socialize without hesitation, limitation or fear.”

In addition to underwriting the show, Ressler Subaru will present the all-new 2008 Tribeca at the event. Product literature and door prize items also will be featured as part of their display. “We’re fortunate that our manufacturer is favorable toward the GLBT community. Subaru of America has stepped up to help us sponsor this show,” commented Frank.

For that reason I recommend two things: First, that you not buy a vehicle from Ressler Chevrolet or Ressler Subaru. Second, I recommend against purchasing a Subaru altogether. These two companies are working together to actively promote sin in our community. If they’re so proud of themselves, I challenge Dave Ressler to order these plates for the vehicles on his lot: 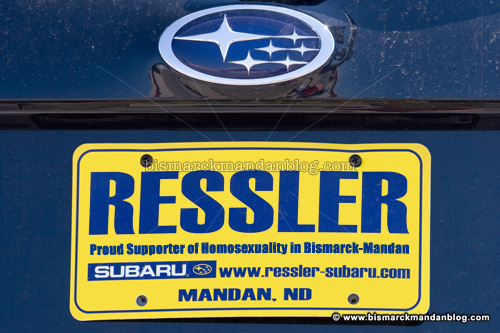 Put this on the front and back of every new Subaru on the lot, and see how sales do. Homosexuality is a sin; the Bible clearly states so, and I suspect that the vast majority of this community would agree. Look how many Christian churches there are in Bismarck and Mandan. Regardless of their other denominational differences, most of them still claim to have their basis in the Bible. God’s word is very clear that homosexuality is an abomination to God.

Update: according to the April 2008 issue of City Magazine, the Ressler Chevrolet and Subaru dealerships were purchased by Bob Kupper, who’s also General Manager of the dealerships.

Here’s where I want to clarify something about homosexuality and sin. Homosexuality is not the only abomination the Bible talks about. There are others that all of us are probably guilty of at one time or another: lying, pride, mischief, theft, adultery…things that are not so disgusting to man in their physical manifestation, but are on equal footing with homosexuality in God’s eyes. Sin is sin, period. Lest any Christians out there start thinking they’re any better than the queers*, they’d better read their Bibles more closely. The Bible says that “All have sinned, and come short of the glory of God.” (Romans 3:23)…so don’t anyone start getting self-righteous.

Having said that, you don’t have Liars’ Pride weekend, Adulterers Cruises on the riverboat, or any Thieves’ Rights parades going on, do you? The whole “Gay Pride” isn’t just about sin, it’s about people defining themselves by, and reveling in, their sin. Look at Romans 1:22-32, for instance:

Professing themselves to be wise, they became fools,
And changed the glory of the uncorruptible God into an image made like to corruptible man, and to birds, and fourfooted beasts, and creeping things.
Wherefore God also gave them up to uncleanness through the lusts of their own hearts, to dishonour their own bodies between themselves:
Who changed the truth of God into a lie, and worshipped and served the creature more than the Creator, who is blessed for ever. Amen.
For this cause God gave them up unto vile affections: for even their women did change the natural use into that which is against nature:
And likewise also the men, leaving the natural use of the woman, burned in their lust one toward another; men with men working that which is unseemly, and receiving in themselves that recompence of their error which was meet.
And even as they did not like to retain God in their knowledge, God gave them over to a reprobate mind, to do those things which are not convenient;
Being filled with all unrighteousness, fornication, wickedness, covetousness, maliciousness; full of envy, murder, debate, deceit, malignity; whisperers,
Backbiters, haters of God, despiteful, proud, boasters, inventors of evil things, disobedient to parents,
Without understanding, covenantbreakers, without natural affection, implacable, unmerciful:
Who knowing the judgment of God, that they which commit such things are worthy of death, not only do the same, but have pleasure in them that do them.

I can already sense the term “hate speech” coming up, and the lefties emailing me telling me how I’m so angry and hateful. No, this post isn’t about anger or hate; it’s not about me thinking I or any other Christian are better than any of the queers*. It’s about showing the truth about God’s word. You guys wanna have a “Pride Fest” and champion your sin, that’s your right. But don’t get all worked up when someone shows you out of the Bible that you’re dead wrong. My hope would be that these folks would read the Bible, see that they (like me, you, or any other person) need to be born again and turn from their sin. I’d love to see them get saved and meet ’em in heaven some day. How hateful is that?

*Don’t get on my case for using the term “queer”, either…until TV shows like “Queer as Folk” or “Queer Eye…” get new titles, or the Pride Fest folks stop calling their ride on the Lewis & Clark Riverboat the “Fruit Float.” I’m using their own terminology. And it is queer, after all.