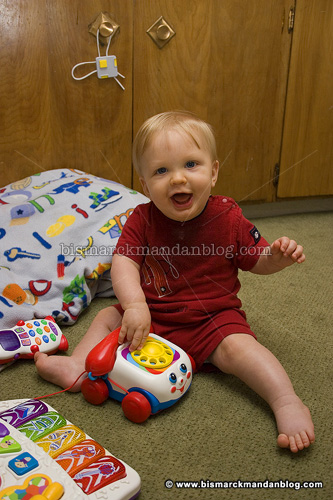 Last week I took my 35,000th photo with this camera. What more suitable way to chalk up such a milestone than by documenting a fun time playing with my son? I was feeding our 19 month old, PJ, while his little brother Jonathan, now almost 9 months old, played with his toys on the floor nearby. Little “Sparky,” as Jonathan is often called, gets the honor of being the 35,000th picture.

I just got done spoon-feeding Jonathan tonight, as one does with such a little baby, and it reminded me of a story I heard this weekend.

Click on the dreaded Windows icon to hear two brief examples of consolation.

I know, I am no huge fan of Microsoft or Windows. If you have a Mac and want to listen to it, simply click here to download the components to play Windows Media files in the Quicktime Player on your Mac (free). I use them to listen to ASX, WMV, and WMA files on my liquid-cooled, quad-core G5 Mac at work. They are fantastic, and they are free.

Back to the audio. Touching stuff, huh? As a relatively new daddy I was floored by these two stories. They were spoken by a missionary to the Pacific who visited our church this weekend. I’d love to give him direct credit, but some of these guys take a risks being in the field, often political and sometimes physical. Putting their names on the Internet can sometimes cause unintended harm and I’d hate to do so.

Hopefully by electronically enabling you to hear this man’s words, which moved me as I struggle to be a good daddy and provide my little boys with blessed memories, I can pass along some of that consolation he was talking about.