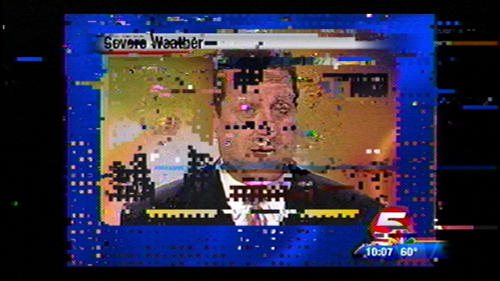 Ah…remember the good old days of analog cell phones, when you only got 45 minutes of battery but you could still hear somebody talking when the signal was weak? Maybe you could even make out what they were saying through the static. Then came digital. Long battery times, fun games, text messaging…and dropouts. So it goes with television, too.

There are actually three weak links in a digital television transmission here in Bismarck, if you don’t count the operator:

First, if the station is on network programming, the satellite signal can be rained out. That happened to me a lot when I was a master control operator. Sometimes you can get a backup feed on a different frequency, but not always. At KFYR we could route ourselves a satellite feed from Minot, Williston, or Dickinson if needed.

Second, you have the STL, or Studio – Transmitter Link. These are microwave frequency transmissions between a dish at the TV station and one at the transmitter tower south of Mandan. These signals can be rained out too, but you have to be in a VERY heavy thunderstorm for that to happen. Yet it does happen. KFYR had two such links, and if I suspected one was about to fail I could switch to the other. If you miss your opportunity to do that, then you’re out of luck. I don’t know if they still have two such links now that they’re digital, but a rain-out appears to be what was happening in the image above. I had 97% signal from the KFYR transmitter, but I bet the transmitter was getting a very poor signal from the studio.

Third, you have to have this thing called electricity to run your transmitter. KFYR had a generator at the transmitter site capable of starting itself instantly and switching the transmitter to generator power in the event of a power failure. To my recollection, no other Bismarck TV station has this. Which means that if you don’t have cable, you ain’t seeing Too Tall if the power is out in St. Anthony. The transmitter sites are on the MorGranSioux power grid, not MDU like us city folk.

So there you have it…if you, like me, don’t have cable TV, you run the risk of having your local stations yanked out from under you by severe weather. That’s a bummer, because that’s when they’re needed most. But such are the limitations of technology. They do their best to stay on the air, obviously. KXMB has even started putting the radar on channel 12.3, which is really keen for those of us who don’t have the cable TV radar channel. I just hope they either bought a generator or don’t have a power outage!