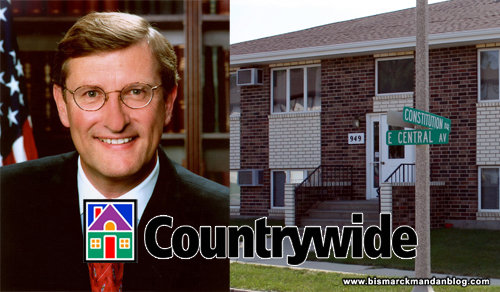 Senator Kent Conrad has scored a few victories in dodging investigation into his Countrywide mortgage on the property he owns in Bismarck. He and Senator Chris Dodd have been under investigation for getting “sweetheart mortgages” for quite some time until the Democrats won the majority in the Senate and dismissed the matter. Republicans are still trying to get to the bottom of this, and want to issue subpoenas to get some answers. The Democrats have been working to stall that process.

This article describes the crazy lengths to which they’ll go: changing the locks on the door to the committee meeting room where the decision to issue subpoenas would be made. They then informed Republicans that only the Democrats would have the keys.

The article goes on to explain that it’s a retaliatory trick that the Democrats are using after being busted for canceling a meeting on the matter, lying that they had conflicts in their schedules.

The larger crime here, in my opinion, dwarfs the sweetheart mortgage deal on the property. It is my firm belief that Senators Kent Conrad and Byron Dorgan claim this apartment complex as their “residence” so they can remain eligible as North Dakotans on paper for reelection and get sent back east, where Senator Conrad has little real estate gems like this $1.4 million beach house.

If you want more information on this little bit of “inverse carpetbagging” on behalf of North Dakota’s members of the United States Senate, just click here.