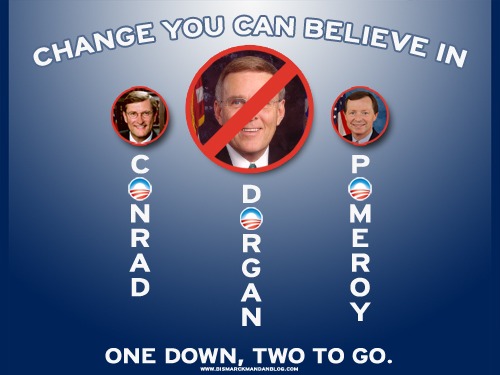 This is good news and bad news. First the good news: Senator Dorgan will NOT be coming back next year as a US Senator from the great state of North Dakota. We won’t see any loss of representation, since he hasn’t represented North Dakota views in years. In fact, his Republican replacement will probably do a far better job.

The bad news: I expect him to vote with a “scorched earth” mentality in mind, since we don’t have his re-election to hold over his combover-clad head any more. Plus, I suppose he’ll dole out his four million dollar war chest to PACs set up to elect other North Dakota democrats across the various ballots.

With all the liberal Democrats that are announcing they won’t be running in November, I expect they’re all being bought off with promises of “czarship” or some other cushy reward within the bowels of the Obama administration. Kent Conrad alluded to as much already. That’s the way of Chicago thug politics: buy off and intimidate.

The major thing of note in Byron’s career, and this is why I refer to him as Byron “Skybox” Dorgan, was his involvement with lobbyist Jack Abramoff, something the media branded as a “Republican scandal” to shield their beloved Democrats. There is the Northern Plains Heritage Area debacle as well, which is still in the “unfinished business” category.

One question: does this mean he’ll “return” to his “home” at 1001 Central Avenue #8 here in Bismarck? Not bloody likely. Heaven forbid that we get another Democrat senator…but if so, will Kent Conrad rent this placeholder apartment out to them instead?

I guess Byron will have to remove this illustrious placard from his mailbox at good ol’ Apartment Number Eight. Think he’ll be able to cope without such luxurious trappings of office? I bet his home on the east coast doesn’t look this shabby!

Good Riddance, Senator Dorgan. Don’t let the door hit your combover on your way out.