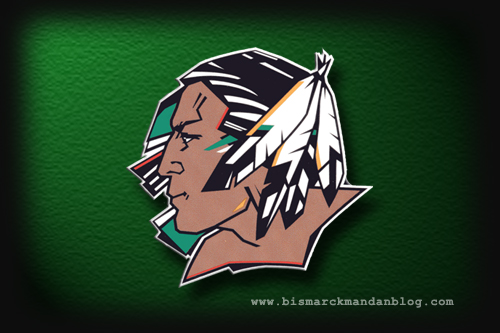 They’re at it again: according to this article in the Bismarck Tribune, a group of Native American students at UND has filed a lawsuit against pretty much everybody they could name in order to stop the use of the UND Fighting Sioux logo and nickname. There’s ONE thing you need to know about this entire controversy, and it’s characterized neatly within the text of the Tribune story:

There you have it. This entire controversy was sparked when a bunch of out-of-state liberals at the NCAA decided that the logo and nickname, granted to the college approximately forty years ago, were “hostile and abusive.” I’ve got a little graphic for ya: 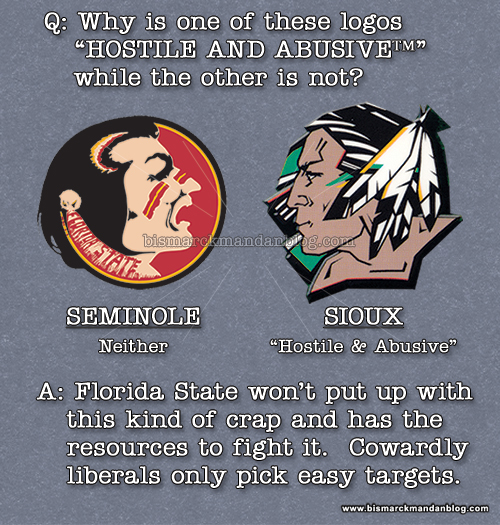 Other states have won this fight; they simply need to stand up to these nutjob activists. This fight is about principle as much as it is about the darn logo. It’s interesting how big institutions with greater numbers to play with have been removed from the “hostile and abusive” list while poor little UND has been hammered at relentlessly, an easy target due to its fewer resources to resist this Politically Correct™ tyranny. This fight is every bit as much about telling out-of-state activists to take a hike as it is to keep our beloved logo.

But if the logo’s got to go, I’ve got an alternative:

With a few simple modifications, we could be come the Valiant White Men. This could honor the traditions and hard-working spirit of the state’s largely German, Norwegian, Scandinavian, and other caucasian populations whose ancestors faced bitter trials to settle this great land.

Not only could we honor the pioneer spirit, then we could let every OTHER minority have a piece of the victimhood game. Right now it’s just one group of sniveling activists mad about the UND logo and nickname. Think how many groups could come out of the woodwork and get their 15 minutes of fame if we had a logo and nickname that honors the majority of the population of our great state!

Of course, I say all this in the name of satire to highlight how silly the “controversy” is. I see people say online and hear in the halls of the state legislature that the issue is a “waste of time” and that there are more important issues than just a logo. For the last time in this post, I will reiterate that this is about more than just a logo and nickname. This is about standing up to out-of-state busy-body activism in the name of “politically correct” tyranny. If this is the front on which this battle will be waged, then let’s fight it with the bravery and tenacity of the Fighting Sioux.