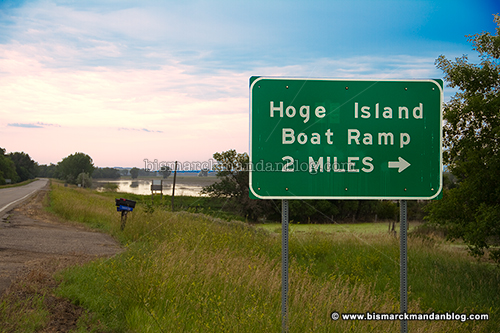 So I’ve been politely poking fun at KFYR-TV and others like my friend Mark who keep referring to “Hogue Island” online. I’ve always known the Hoge Island Boat Landing, the Hoge Field model aircraft club, and the like…so where did the U come from?

Bringing this up to Mark, he told me to “read the signs!” Always willing to double check myself, I decided to take the long way home after work and investigate. Guess what: Hoge. Look above and see for yourself. Case closed, right? Nope. 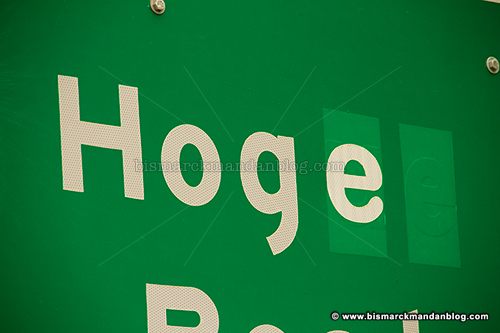 It looks like these signs have been corrected to indicate “Hoge Island” but did originally say “Hogue”. You can see from this photo where the “ue” has been covered and replaced with an “e” to alter the spelling. Did the makers of the original sign make the same “error” that Mark and others have made? Not quite…it appears there may be some actual contention on the spelling.

I was hoping that it might be as simple as looking for a Hoge Township on the Burleigh County map (PDF), but sadly that did not yield the intended result. Burleigh County itself refers to the area as Hoge Island. So how do I try to get an authoritative, definitive answer?

Well, while I’ve actually been wondering about this since late May or early June, it turns out that the Bismarck Tribune has been on top of it. They did this story on the matter back in June and discovered that two branches of the family which once owned the land in the area spelled their last name in two different ways. So we’re BOTH right. Thanks to Chris Bjorke for the legwork on this one.

I knew a guy in college whose last name is Hoag. I wonder if he’d want to chime in on the matter