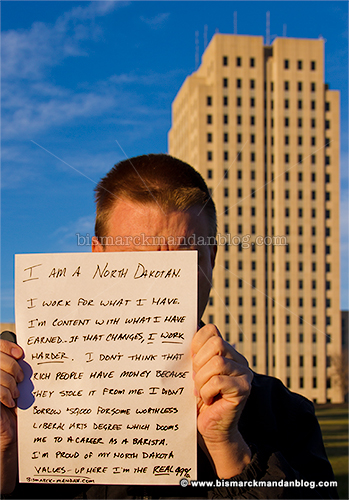 UPDATE: Click on this link to see who is supporting this “movement.”

This afternoon on my way home from work I spotted three hapless kids holding anti-capitalist signs at the top of 7th Street. While the urge might be to try to hurl some common sense their way while waiting for the red light to change, these useful idiots are not worth the time or effort. They’re there because it fills an emotional need, not because the content of those signs bears any resemblance to reality.

I had a fun idea: make a parody of the handwritten sign meme recently made popular by the “Occupy” protests (the term “occupy” itself is funny, because it’s another retread term from the failed “revolutions” of the 1960’s).

I looked at the notes posted in photos by many of these protestors: many hiding their faces, most scrawling notes about tens of thousands of college loan debt for meaningless majors and worthless liberal arts degrees, all wanting someone ELSE to do something about it. That is so contrary to how North Dakotans tend to view themselves and the standard to which we hold ourselves that I felt moved to make a little note of my own.

Here’s a larger version if the one above is hard to read on your screen. I simply wanted to highlight that I believe the exact opposite of what those greedy protesters are all “occupying” for. I call them greedy because in my mind what they’re doing, demanding that someone else give them their property, is far more greedy than some rich guy wanting to keep what he’s earned.

A friend of mine walked around one of the Occupy Bismarck protests and asked people about their signs and what they meant. Most couldn’t answer the questions, and used “I didn’t make this sign” as an excuse. That makes perfect sense, even if the leftist cliches on their signs do not. Clearly these people aren’t the real 99% of anything except maybe the Democrat Party.