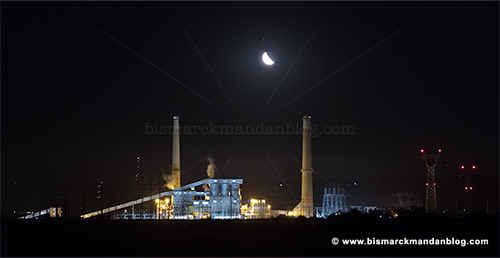 I couldn’t help but give a little tribute to the 80s band with the title of this post. It’s relevant, after all; a power plant can be described quite simply. Despite all the wires, pipes, belts, machines, and computers, the purpose of a power plant is to make steam. The steam turns a turbine or two in order to generate electricity, but all the complex and massive functions of the plant essentially exist to make water really, really hot.

I was on my way to the Harmon Lake area to see if some astrophotography was in order when I spotted this view of Heskett Station. I pulled over at the nearest approach, took the Hoof Express back to a good camera location, and snapped a few shots. The moon was in just the right spot, and so was I. From there it was only a short hop north to Harmon and the decision that Saturday night was far too cold for this would-be photographer to be standing outside in a hoodie and light jacket. Thanks to the view above, though, I didn’t come home empty handed.