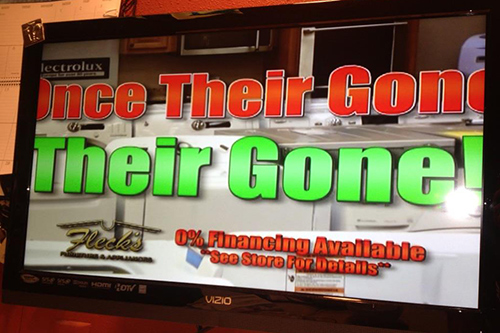 When it comes to local television commercial production, you often get what you pay for. I say this because often the production is simply a giveaway in order to secure the airtime buy. Purchase a rotation from station X, and they’ll produce your ad for nothing. Perhaps that’s what happened here (thanks to my friend Mike for the catch and the photo). In any case, I’d be pretty ticked if I was Fleck’s Furniture and my television ad made it look like I had a limited grasp of the English language. In case you’re wondering, I don’t know which TV station aired this ad.

One reason posting has been light this week is that I’ve been pretty tied up with a 3D animation job that requires what little spare time I’ve had available. Modeling, lighting, and animating are fun challenges but very time consuming. Even now, at 2:44am, I’m typing this as I watch the animation build frame by frame. Good thing I took a combat nap earlier in the evening.

One more thought on the subject of grammar: when consoling a grammar freak, say “There, their, they’re…”