…who knows, maybe this year they’ll kill one!

I’ve got a really big chip on my shoulder, and my arms, and my legs, and my helmet, and a few other places about this issue. The issue is called “chip seal,” and it’s an extreme hazard to motorcyclists.

I took photos today to illustrate my story, which transpired last night. I was out for a leisurely cruise on the big bike when I came around the corner at the south end of Sertoma park… 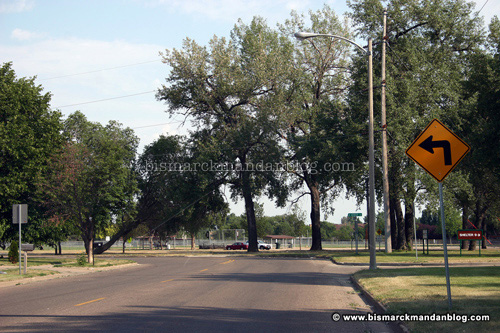 Note the absence of any signs indicating that trouble might be lurking around the bend. Note how far from the actual corner the streetlight is placed. A motorcyclist would have no apparent need to think that anything is amiss in this corner…would they?

Here’s what greeted me at the exit of the corner. I will be the first to admit that the photo is underwhelming. It’s just not possible to convey a patch of gravel like this, especially not in a picture 500 pixels wide. But put a motorcycle on it, especially one that is leaned over coming out of a corner, and it’s like throwing a guy on a sea of marbles and giving him a good shove. Imagine how much fun that can be…especially with all those curbs around!

I was seriously injured in an accident due to a similar situation: chip seal gravel spread several inches thick on the crest of a hill, in a corner, where there was no illumination from streetlights. I was the first rider in a group, the only one without a passenger. I hit the gravel leaned over into the corner and almost saved it, but the bike went out from under me. I won’t give you a description of my injuries, because they’re pretty nasty. I’ve got photos and horrible scars to prove it. If I had not been wearing my helmet I would certainly have died…I slid straight toward a curb, hitting it hard enough to take a chip out of the concrete. I was able to push away from the bike at the last instant, thankfully. The gravel rolled up the sleeve of my riding jacket, allowing lots of damage to my arm. It also sliced right through my pants, and that was even worse. The rest I’ll leave up to the imagination. Thankfully we had a doctor, and RN, and a surgical technician there that night…I think God was really taking care of us that evening.

So, along comes the City of Bismarck, spreading gravel in dark corners with no signage. They own thousands of dollars worth of big orange signs saying “FRESH OIL – LOOSE ROCK” but only put them up in well lit areas around downtown. They won’t put them where real danger exists. A couple of years ago I saw a crew chip-sealing Fox Island Road, including the tight unlit corner at the end. I saw the foreman sitting in his truck, rolled up on my motorcycle, and asked if they were going to be putting signs up at either end. I explained that the gravel is dangerous to motorcyclists who can’t see it that easily in the dark. He gave me some smart-ass answer and just stared at me with a stupid grin. These are the people entrusted with our safety, and I guess the signs stay on the truck.

This is an annual thing, obviously. Those of us with a lot of motorcycling experience know that mid-June means surprises are even more likely around every corner in town. How many new riders know that? They stand to learn a very important, possibly painful, lesson that motorcyclists must always be twice as vigilant as your average cage (I’m sorry, car) driver out there.

With all the rich folks riding Harley-Davidsons™ these days, it’d be interesting to see some high-priced attorney lay down his Hog on some unmarked gravel, then heal up just enough to sue the living pants off the city. I’m not a fan of liability litigation, but I’ve been making noise on this matter for over ten years. Nobody’s listening. So if you’re a motorcyclist and are reading this, be warned: the City of Bismarck, in its negligence and carelessness, is setting the traps for you. Pay extra attention when you’re riding out there.