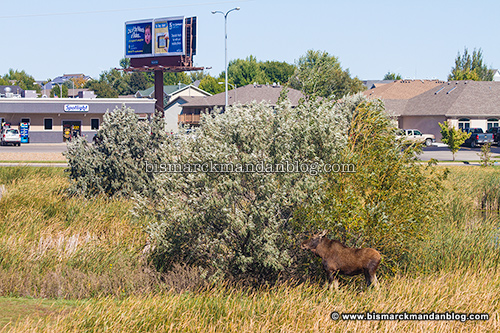 A friend of mine who works nearby called me this morning to tell me that a moose had decided to visit.  It later walked across Century Avenue, deciding to hang out and enjoy the nice wetland area on the corner of 19th Street.  After a taco lunch with some new friends I decided to stop by. 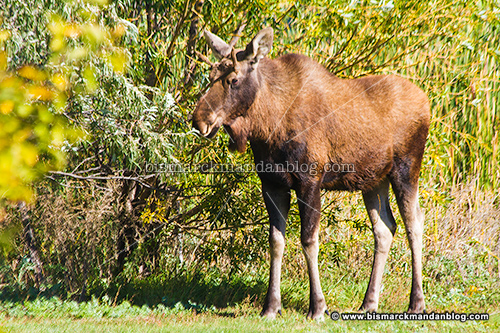 While making some small talk with a patrol officer, animal control officer, and game & fish officer I was able to grab a couple of shots while keeping my distance.  The beast was having a nice lunch and didn’t seem to care that he was about to become a spectacle. 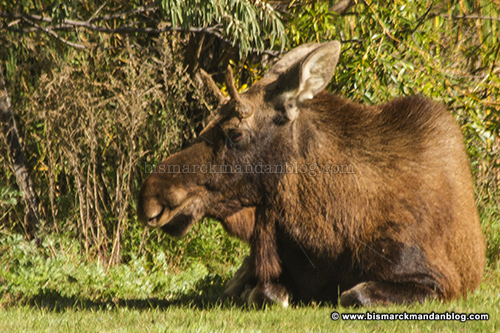 About the time that someone remarked that they figured he was about to move on, the moose showed us how much we know about moose…mooses…meese…whatever.  He dropped to his knees and eventually settled down to chill and digest his lunch.

That’s when the circus came to town.  Soon there were gapers everywhere.  I even saw some absolute idiot dash across 19th street, tugging along two little girls who couldn’t be older than 5, through 35mph traffic while all the drivers were paying attention to the moose and not potential jaywalkers.  While the moose couldn’t have cared less, the police were notably agitated…and rightly so.

Not wanting to be lumped in with the developing crowd, I left.  I’d already gotten some satisfying shots, managed to stay out of everyone’s way, and didn’t want to be part of the officers’ consternation. 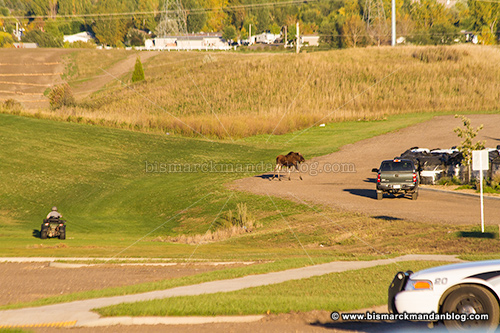 On my way home from work I decided to swing by the area and see if they’d managed to bring their plan of walking the moose southward to the Hay Creek area to fruition.  They’d just begun.  I kept ample distance due to the wonder of telephoto lenses, snapped one shot, and again left as quickly as I’d come.

I presume that by this time the moose has meandered southward.  In the mean time, we North Dakotans will wait for the next spectacle at which to gawk en masse.  It’s something we’re really good at, even if we feel somewhat silly afterwards.  Maybe next someone will spot a flying squirrel!