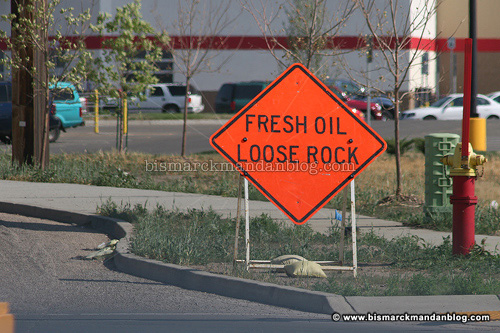 This is what should be posted at every site where chip-seal gravel is applied to the road. Like I’ve posted before recently, this stuff is like marbles to a motorcycle. So far I’ve noticed at least two corners where no signs exist, but on brightly lit areas of straight road there’s a sign. It makes no sense.

First off, I think chip-sealing a road is a dubious attempt at street maintenance. Second, the city doesn’t want to spend the money to do it right; if they were to apply the tar, then the gravel, and compact it with a roller or something, then they could quickly sweep up the excess and have a finished job. But they’re too cheap to do so, relying instead on vehicle traffic to compact the gravel into the tar layer.

The problem with that is they have to spread it so deep because car tires throw the gravel to the side instead of compacting it. The deeper they spread this stuff, the more hazardous it is. They should either do the job properly or, as I prefer, not at all.