Disclaimer: This is not a photo of my yard.

I was lucky to stumble upon a yard with these two signs side by side, because these are the two people I recommend you vote for in the upcoming City Commission race.  I’d be happy to explain why.

First off, Mike Motsenbacher has a consistent record as a fiscal conservative, unlike anyone on our current city commission.  He’s been involved with conservative activist groups in town as long as I’ve known him, he’s got business experience as well, and I just plain like him.  You and I can trust him to be prudent in his decision making and not share the same fetishes as the current commissioners.

But here’s the newcomer (to me, anyway): Duane Pool.  A friend of mine received this letter from him, and I’ve received permission to reprint it.  Upon reading this letter I became instantly convinced that I’m voting Pool for Commissioner in the June election:

I want to thank all of you for your varying levels of support, influence, council and inspiration leading up to this last week of the Bismarck City Commission Election. I know not all of you a Bismarck residents but thank you anyway. If you are a resident, I encourage you to vote or stop by the City-County building and turn in an absentee ballot if you are not able to vote on Tuesday, June 10th.

This election is about choosing a city commission that reflects your values and values your input. I hope I have shown myself capable of doing so and deserving of your support. I strongly encourage you to watch the League of Women Voters forum on Dakota Community Access or online at freetv.org.

I hope I have your support at the polls on Tuesday! 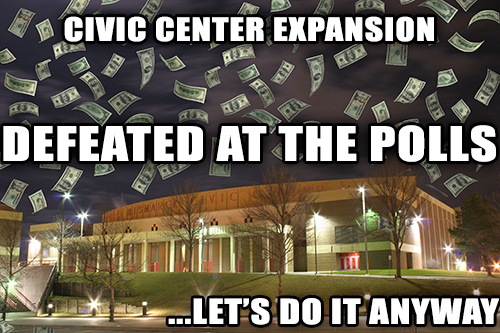 The Civic Center thing struck a chord with me.  I’m a Civic Center employee, but I was firmly against pouring more taxpayer money into the expansion.  I outlined my reasons in a post here.  So were most of the rest of you.  That was not enough to prevent our commissioners and mayor from diverting taxpayer moneys from elsewhere and proceeding anyway.  For that reason, they need to go.  Their cavalier attitude and fetish for downtown, “green space”, and the Civic Center expansion need to be their ticket out of office.  Duane Pool gets it.

I may have some other research to pass along regarding the vote this week (if you early vote) and next.  Stay tuned, and vote Pool and Motsenbacher for City Commish!