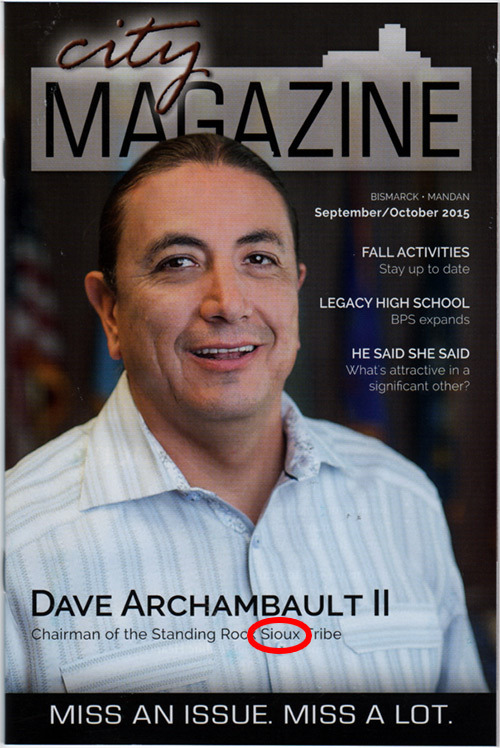 I like to pick up City Magazine, usually for my friend Tom Regan’s feature articles.  The rest is thinly veiled advertising that doesn’t really interest me, but the cover story is usually pretty interesting and features a noteworthy local figure.  The new issue is no different, but it sure is insensitive (if you’re inclined toward political correctness, that is).

For years we’ve been told that the term “Sioux” is “Hostile and Abusive™” and that anyone who wants to see it continue as the nickname / mascot for the University of North Dakota’s athletic programs is deemed a Racist™ by activists tied to the race industry.  Then why is it being used to describe the Standing Rock Sioux (oops, I said it) Tribe?

Let’s not forget, that Standing Rock is the tribe that did not allow its members to vote on whether the nickname and logo should be kept or abandoned.  By doing so, deadlines passed which allowed the opponents of it to win an administrative victory toward the demise of the logo.

You’d think that the tribe responsible (to the dismay of many of its members) for putting a fork in the Fighting Sioux logo would be among the last to smear themselves with such a vile slur.  Nope.  I suppose it’s the same standard that hip hop artists hide behind with their Grammy-winning vernacular.  Lame.