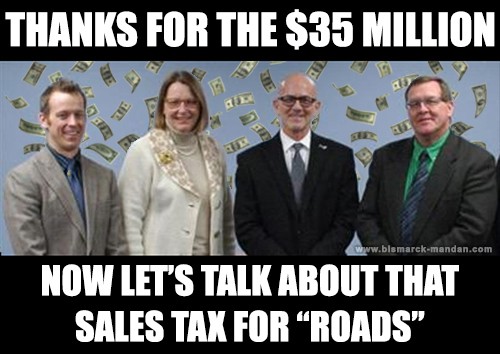 Feeling spunky from ramming through the FiveSouth project, the City Commission (with Commissioner Marquardt dissenting) is starting to talk about another sales tax. According to the Bismarck Tribune reported that the commission is examining the idea of taxing us even more to pay for road improvements.

If we need money for roads so badly, why were we throwing $35 million into a TIF district for the pet project of the Commission and their downtown cronies?

When that issue was brought up, Mayor Seminary (who I like personally, even though his policies drive me bat-scat crazy) simply said, “they were separate issues” (according to the Tribune).

Really?  If I tell my wife that I’m going to spend $1000 on a new big screen TV instead of replacing a leaky house roof or an ailing vehicle, do you think she’s going to consider them “separate issues” as the Mayor said?  Heck, no…and she’d be right (as usual).

Perhaps by “separate issues” Mayor Seminary means “we’ll just dip into the pockets of the citizens for the additional money”.  That’s something you and I can’t do; if we have financial responsibilities, we own up to them before recklessly spending money on foolish luxuries.  This is a concept that has completely eluded Mayor Seminary and the Commission.

The lone voice of sanity, Commissioner Marquardt, can’t quell the stupidity on his own.  We need to get him some company on the City Commission.  Our city needs some responsible leadership from a Commission that will obey the will of the people and act in a fiscally responsible manner on our behalf.