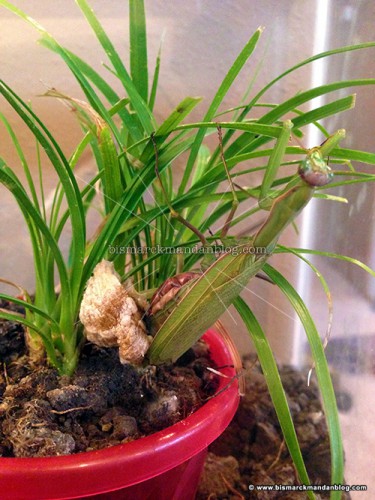 My youngest boy catches the strangest things as if it’s second nature.  That’s why I was elated but not altogether surprised when he brought home Mantie the praying mantis.  She’s huge, ferocious, and entertaining.  We even let her spend a few days at the boys’ dentist’s office, where I’m told she was a big hit.  And now she’s about to have company.

As you can see in the photo above, she’s just laid an enormous egg sac.  We suspected this was coming; she’d been blimping out like crazy since we got her.  Male mantises are much smaller than Mantie, and often don’t survive the mating process, so I had no doubt that Mantie was a girl.  Whether or not she was going to lay eggs was another matter.  Finding a praying mantis in North Dakota is rare enough; what are the odds of that mantis getting a date?

I’m told that there could be upwards of 200 little Manties in there.  While I’m okay with keeping a cricket farm for Mantie’s nutritional needs, I have no idea where I can get aphids – especially enough to feed a dinner part of 200 – so I’m planning on stashing the egg sac out by the water behind our house.  It should ride out just fine until Spring, and then maybe I’ll have an army of mantises to take care of mosquitoes.  Wouldn’t that be cool?

The trick now is to get the egg sac outside in the cold so it doesn’t hatch.  Otherwise the warm indoor air will trigger something for which we’re entirely unprepared.  Yikes!