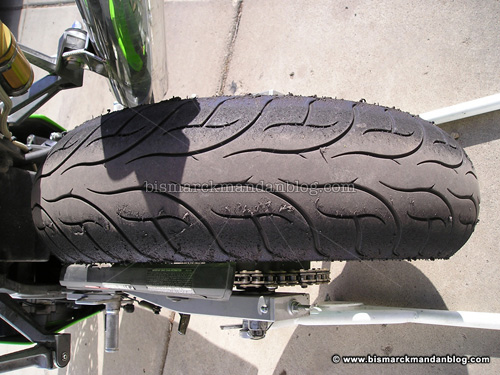 I forgot I had even taken this picture, I found it this weekend. This is what a tire looks after a race. One would think that it’s in awful condition, but that’s actually how they’re supposed to look. Race tires are vastly different than street tires.

One’s first impression of a “race tire” might be that it’s super sticky. Not at first; in fact, race tires are harder than street tires until they get hot due to high speed and extreme cornering. It’s unlikely you’ll ever see a race tire get hot enough on the street to look like this one, especially on North Dakota roads. I’ve gotten street tires close, but that’s a different matter.

The rubber balled up on the edges is also normal; it’s the balled-up gummy rubber on the edges that helps with traction at extreme lean, when I’m dragging my knee on the ground. The track surface at the edge of the racing line will typically have lots of little flung rubber balls on it.

Once these tires do get up to temperature on the track, though, they’re sticky like you wouldn’t believe. One time at Brainerd I crashed in the super tight corner nicknamed the “Bus Stop,” because that’s where everybody gets off at one time or another. While we pushed my bike through the gravel trap to transport it back to the pits, gravel rocks the size of quarters were stuck to the tire like sprinkles on a donut. Now THAT is a sticky tire!

I know this post didn’t really have a local theme to it, but I’ve really been pining for the track lately. Having a baby on the way really has me doubtful about returning to racing in the future, although I’m just about bursting with the need to turn some hard laps!