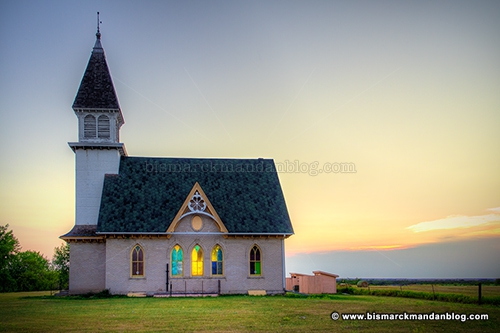 I really wanted to get a shot like this at the Norway Lutheran Church for quite some time.  What I suspected was that the sun would be nowhere near where I needed it to be in order to get the windows lit.  Complicating things is the fact that there were shades or something obstructing the bottom half of the windows on the west side.  Dang.

I thought I had an iPod photo of this, but I don’t – I actually set a row of flashes on stands against the top of the west side windows, shooting a trifecta of blazing light into the sanctuary as I tried to catch the sunset behind.

Cheating?  Not if I tell people how I did it.  But it will most likely be winter before the setting sun appears directly west of these windows, and I didn’t have time to wait.  My wife was with me for this day’s photo excursion, and I knew we were going to make it back to Bismarck much later than I’d originally told her.  Thankfully she knows me better than I know myself and was prepared to get home at midnight. 🙂

One thought on “Made me work for it”