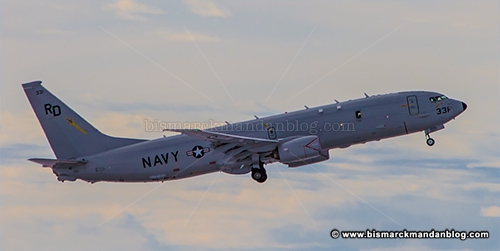 I walked out of a lunch appointment on Friday and immediately noticed a jet on a very unusual trajectory over Bismarck, far out of position compared to the track usually taken on approach to Runway 13.  It was a short leg, and they were still banking south of Main Avenue.  Even better, it was a touch-and-go.  Well, being the curious type, I had to see what was up.  That’s when I snapped this shot and realized it was a Navy plane, not some wayward bus driver or something. 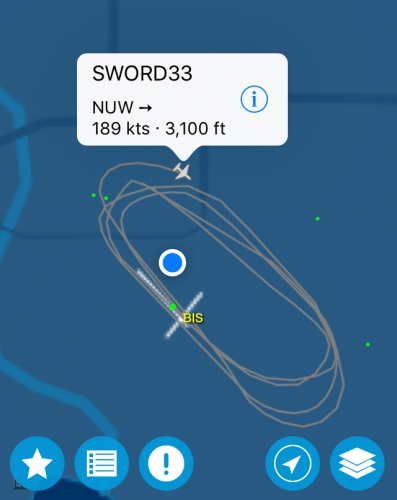 Just doing laps, as you can see.  A few down the Runway 13 way, followed by a few down Runway 31.  Cruising Main, almost.  My flight app did give an ADS-B entry for this aircraft, but being a military plane that was all I got.  The desktop app, however, was blank. No worries, it doesn’t take long with “the Google” to narrow down that this is a P-8A Poseidon.  There’s a good chance it’s from Whidbey Island, home to those F-18s which stopped in for A&B Pizza about this time last year. AirSOC has an article about the P-8A at Whidbey Island, which you can read here. 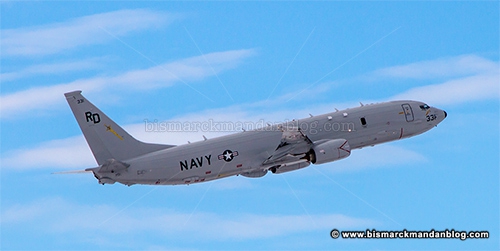 This is a particularly cool aircraft (Wikipedia), even though it isn’t as exciting as a fighter jet. It’s a sub-hunter, and apparently a pretty modern one.  Just like those F-18s last year, which are actually two-seater Super Hornets loaded with all kinds of electronic warfare equipment, this plane is chock full o’ goodies.  First off, look at all the antennae on the top.  The 737-800 this is based on doesn’t have those.  It’s also capable of deploying anti-submarine weapons once it detects ’em.  Sweet.  Want to know more about some of the toys?  Click on this link.

A few more laps, and they were out of here.  I listened to a little bit of the CTAF banter on my handheld transceiver, then went on with my day.  I had put in a long week, and it was time to knock off early and play photographer for a while.