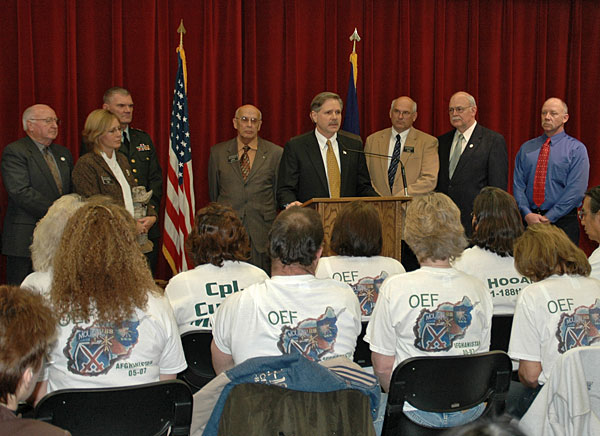 This was a bittersweet day for the families of fallen soldiers in North Dakota. Some of those giving testimony in favor of House Bill 1040, which prohibits protesting near funerals or related activities, have had to endure some pretty nasty circumstances. That’s what sadly made this bill, now law, necessary.

As I’m sure everybody knows, a group from Westboro Baptist Church (which is not a Baptist church, they just claim it) was up here to protest funerals in North Dakota. I don’t recall them having the guts to set foot on sovereign tribal land, however…hopefully they didn’t. These people claim a weird mixture of twisted and perverted Old and New Testament theologies with rancid hate and come up with the tactic of protesting funerals across the country. What they don’t tell you is that they’re also licensed attornies just waiting for some outraged patriot to lay a hand on them. Thankfully we haven’t had any such cases here, although it does require a lot of personal restraint. 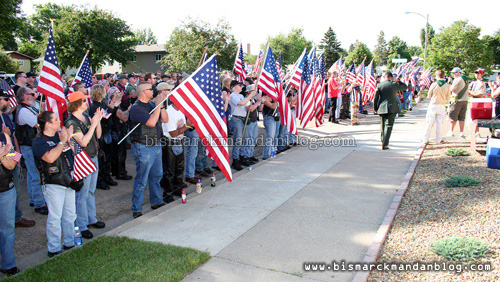 That’s where the Patriot Guard riders come in. While this picture from last June doesn’t convey how many people actually stand in attendance for the Patriot Guard, at least it shows that the families of fallen soldiers do not stand alone. It just goes to show that patriots can band together and honor our nation’s soldiers and their loved ones with actions, not just words.

So now, with this bill becoming law, protests like the ones I’ve decribed and stood to block are illegal. Will that make them stop? I sure hope so. Regardless, I’m sure the Patriot Guard riders will still stand in attendance to honor and pay respect to fallen soldiers and their loved ones whenever they’re called to do so.

The photo above is part of the ND state gallery. I’m holed up at home with a sore throat – fever – chills – headache kind of thing today. In fact, I slept from 7am to 7pm! Photos owned by the government are public domain, as far as I know…if they complain, I’ll take it down. But I don’t think I’m engaging in anything dishonest by using their photo. I’m sure Governor Hoeven and the others involved in this law’s passing are happy to get the word out. Now I’m going back to bed – my head’s in Mississippi (kudos if you get that music reference)