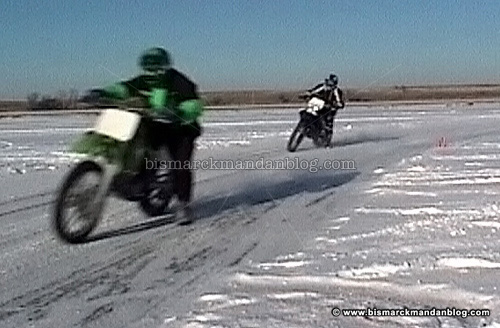 Who says winter has to put a stop to motorcycle racing? This is a shot from a while back when I was turning laps on an ice course with several friends. (It was also before I went to Bob’s Photo and got a decent camera.) The location and identities of the guys will remain undisclosed because of one simple reason: lawsuits.

There are quite a few local guys who spike up their tires and race on the ice every winter. We plowed a course on a frozen body of water, put up cones to mark the corners, and then went nuts. Every now and then the racing would stop, people would grab shovels, and we’d go groom the corners. Those spikes shred the ice in a hurry, and we’d get drifts of ice in the corners that needed to be cleared for better traction. But it had to be kept secret…why?

The particular property we were using is privately owned. We had permission from the owner to be there, it was an invite only event, and that’s the way it has to stay. The reason is to protect the gracious landowner from a lawsuit should somebody come out uninvited, injure themselves, and suddenly decide it wasn’t their fault. It’s a shame, but in these 50 United Litigious States we live in, it’s a fact of life.

It’s a lot like the off-road course east of town on the MME hill. It’s marked No Trespassing, but for certain folks it’s open for use, as long as we keep a signed waver in the filing cabinet in the trucking company office. For most of us it’s a no-brainer…we try to go as fast as we can on a particular piece of dirt or ice, and any consequences belong solely to the rider. Sadly, many people don’t think that way, and for that reason a lot of fun has to be kept within a tightly knit group of riders.