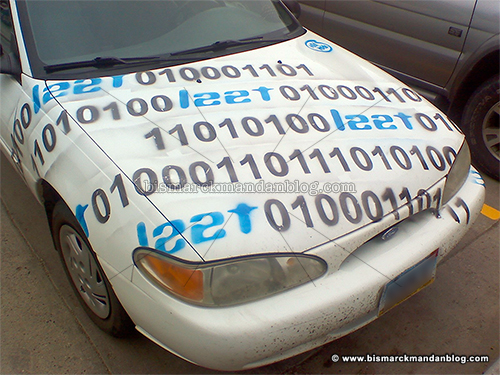 I spotted this “leetmobile” in a parking lot a while back and had to nab a quick cell phone shot of it. I couldn’t actually tell you if the binary code thereon means anything, since I haven’t remembered how to read binary code since the 1980s. While I’ve blurred out the license plate, I can tell you that it’s a ham radio operator plate. That means the owner of this car is likely quite tech-savvy, even beyond spraying ones and zeros across the hood of his little Ford.

Here’s a little more information about binary code. It’s basically a way of breaking down letters and numbers to the simplest form, combinations of ones and zeros. “10” means 2, which is why I made the joke in the title.

I actually spent way more of my time as an old Apple II geek using hexadecimal numbers and can still convert it to regular numbers in my head (although not quite as quickly as I could back during the Reagan era). It’s commonly used to program website colors, which is why I like the joke “Roses are #FF0000, violets are #0000FF, all my base, are belong to you.” That’s also only funny if you get the corny 80s video game reference.

Okay, now I’ve illustrated my geekdom. No, it’s not my car. 🙂