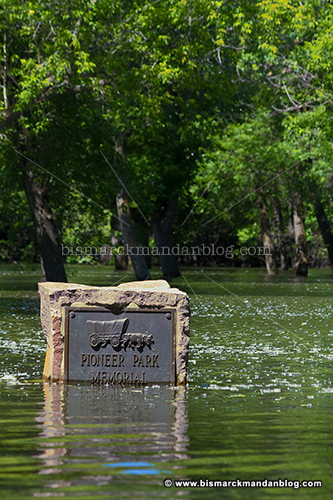 One of the most dramatic and accessible (sorta) sites for local residents to gauge the impact of the Missouri River flooding has got to be Pioneer Park. It’s easy to get a point of reference as far as how high the water is, it’s right along the road, and it’s a feature that most residents have probably seen quite often before and since the flooding began. 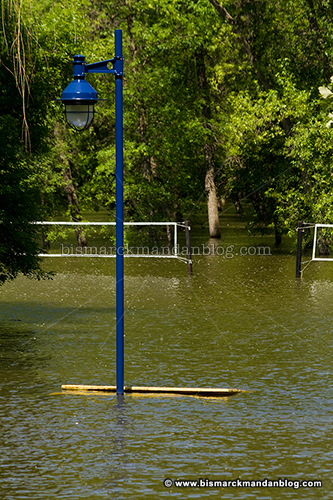 Picnic tables have been relocated as they’ve become somewhat bouyant, getting hung up on other park features. The volleyball nets look more like tennis nets right now, and who knows what the sand in the courts will look like when the water recedes? 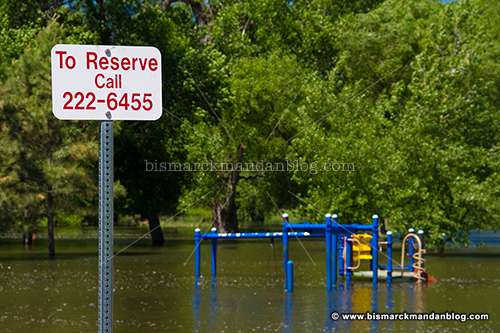 Don’t forget to call and make your reservation! Actually, I think the mosquitoes have this place booked solid for the next couple of months. It’s actually a CLOUD of bugs down there right now, and I’ve got the bites to prove it. In addition to water damage, Bismarck-Mandan is going to have a lot of insect control to perform with all this water. Those plans have already begun. 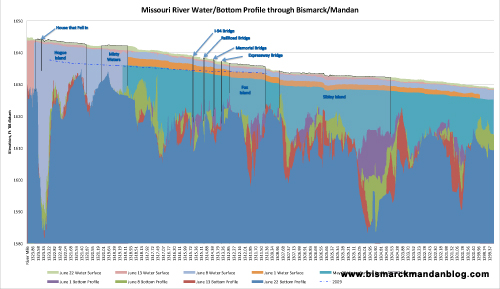 The state Water Commission has released a recent river profile and it has some very interesting results. Some areas have been dug deeper, some have been filled in, and overall the river is, as I’ve heard it described, “active.” Just what the Missouri River looks like, including the channel, banks, and sandbars (or lack thereof), will be very interesting once the waters recede. I don’t know of anyone making any solid predictions on that right now.

Let’s just hope we get through this without further loss of property and that we can begin the recovery process. Minot has it even worse than we do, but one remarkable statistic throughout all of this North Dakota flooding is that we have not lost one single life to the disaster. That’s got to be the best news so far.