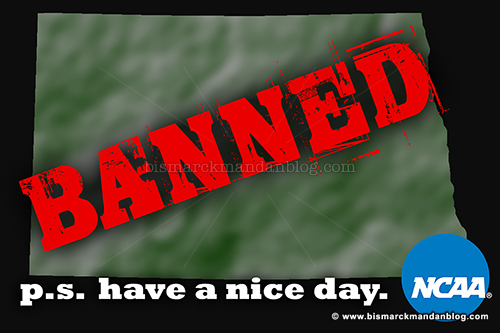 (BISMARCK) Emboldened by their recent victory over the North Dakota legislature and the citizens it represents, the NCAA has delivered another bombshell demand: the state will be barred from hosting post-season events and denied entry into its desired Big Sky Conference unless the state changes its name. That’s right: not the team mascot and logo…the actual name of the state of North Dakota.

“The term ‘Dakota’ is simply another word for ‘Sioux’,” said NCAA executive vice president Bernard Franklin. “We at the NCAA find this state name ”hostile and abusive” and have a strict policy against states which use Native American names. We cannot change that policy. Now that the legislature has seen the light and capitulated in our campaign against the nickname, it’s time to pursue this issue to its logical fruition.”

Worries that visiting sports teams entering the state of North Dakota may be offended when confronted with road signs, license plates, and certain provocative signage bearing the name “North Dakota” at the entry to the University of North Dakota’s campus, representatives of the Big Sky Conference are balking at the idea of allowing UND membership to their organization as well.

“What happens if a team comes to North Dakota and is blindsided by views of Highway Patrol cars, state highway signs, and other ”hostile and abusive” use of native American imagery, only to realize that the very name of the state they’ve entered is based on the use of another word for “Sioux?” lamented Big Sky Commissioner Doug Fullerton. “The state itself is named after the same bigoted terminology which ignited this issue due to its divisive nature. We simply must reconsider their membership.”

North Dakota’s State Board of Higher Education and its president Grant Shaft emphatically support the proposal. “Our tenured academics have been behind this Politically Correct crusade from Day One,” he explains. “Besides, it helps draw people’s attention away from our institutions getting caught inflating enrollment numbers, presidents of numerous state institutions being forced to resign, NDSU’s secret ownership of a private aircraft used in our lobbying efforts, and our demands for more funding and tuition increases even as our appropriations continue to skyrocket. This is good for the state’s higher education cartel on so many levels.”

While efforts to support the name “North Dakota” have stalled on the politically turbulent Standing Rock Reservation, more than two thirds of Spirit Lake tribe’s membership have come out and voted in favor of keeping the state name. A lawsuit to save the name “North Dakota” and prevent millions of globes and maps from becoming obsolete, while standing up for native pride, is in the works. Oddly, open records requests by the tribes have been largely ignored or stalled until it’s too late to draft testimony to the upcoming legislative special session. Frank Black Cloud is not surprised. “ They are simply repeating the same pattern of ignoring us when it comes to our name and likeness; a pattern which has been evident throughout the entire issue,” he said in a public meeting.

While states with enough money to push back are being largely ignored, as they were in the Fighting Sioux Logo instance, smaller states with names such as South Dakota are watching with keen interest. Even though the vast majority of North Dakotans take great pride in the name of their state, the legislature is already working to repeal legislation declaring the state’s name as “North Dakota.” Democrat David O’Connel lamented, “We gave it our best to stand up to and overcome the intimidation and abuse of power of the NCAA. But it is now time to repeal the law. It is no longer about preserving heritage, or defending ND culture. It is about safeguarding a strong future for our state along with its students and athletics.”

(While obviously a parody, it makes one wonder…how far will this crusade against North Dakota go? Some of the quotes in this article are REAL – can you discern them from the parodies?