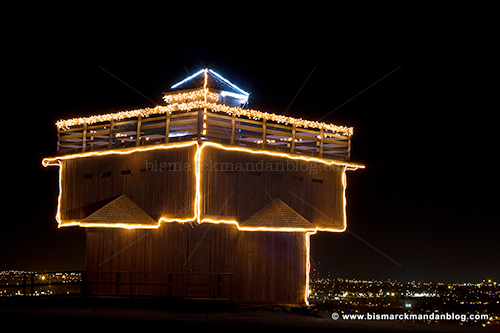 I decided to hike up to the top of Fort Lincoln with a friend for some shots of the decorated blockhouse! The fort to the east had been equipped with Christmas lights, acting as a beacon to those traveling south on Highway 1806 or across the river in the Fox Island area.

I have a pass for the park, but not a key for the padlock on the gate at the bottom of the hill…so it was time to walk. The walk up the hill was exhilarating, with the brisk winter air and the workout of trudging through the shallow snow most of the way. I was amazed at how clear the sky was and how crisp and bright the stars appeared as a result! Once we got up top, the breeze picked up and the temperatures seemed to drop. We had time for a few quick shots before deciding to work our way back down to the truck. 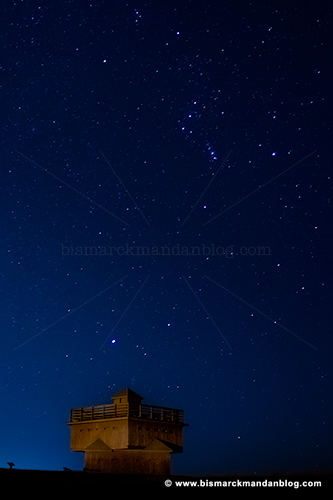 Of course, I had to stop for one other shot on the way back: the constellation Orion over the southwestern blockhouse. You can spot the constellation most easily by locating the “belt” of the hunter, which is formed by three very bright stars right in a row. This constellation doesn’t appear in the North Dakota skies until fall, peaking right around now, and will disappear slowly over the southern horizon as we approach summer. I used my mammoth MagLite, the model fueled by six D-cell batteries, to paint the blockhouse with light.

Now I’m back at home, snug and warm, and had a couple of satisfying photos as a result. Now it’s time to snarf some Pizza Rolls in honor of Jeno Paulucci and go to bed. As I will say every day until Monday, Merry Christmas!