I was out early this morning and spotted some sundogs, so after running my errands I decided to roam around in the cold for a bit and capture them with my camera. It’s been a while since I’ve done any photography, so I’ve resolved to take any opportunities which present themselves.

I decided to find a solitary tree or two for some perspective and shadows. Thankfully, I quickly found a pair.

I like this tree better, but I kinda wish I’d framed a little wider to see if there was still a sundog above. Oh well…it’s still like -16F outside, so there’s no way I’m heading back out there. Even though photos like this are where I live “where the air hurts my face.”

I was on my way up Highway 3 on Saturday, and couldn’t believe the wild, wispy clouds before me. As luck would have it, I was about to zip past an old one-room schoolhouse owned by a dear friend of mine. Instead I pulled in and set about trying to capture the amazing sky.

The clouds looked like wraiths darting across the northern sky, and I’m thrilled to say I was in the right place at the right time. I wish I’d had a lens wide enough to capture it all, although I doubt such a lens even exists.

There is panorama mode, however, and even though it isn’t perfect it will certainly do in a pinch. Even vertically, as it turns out.

As I ventured further north, I continued to run into dramatic skies to accentuate some of my favorite summer North Dakota landscapes. I’ve photographed much of the scenery along and around Highway 3, and it never disappoints.

I was on a mission, though, and a firm timetable, so I had to continue blazing northward. The wispy clouds didn’t last the entire time, but for the best part of them I was right where I needed to be. Thanking the Lord for showing me such an amazing sight, I ventured on and arrived at my destination precisely as scheduled. 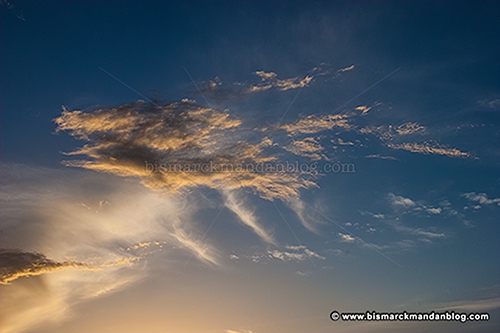 I don’t have much to say here…I just have seen some cool clouds lately, and pointed a camera up at them. 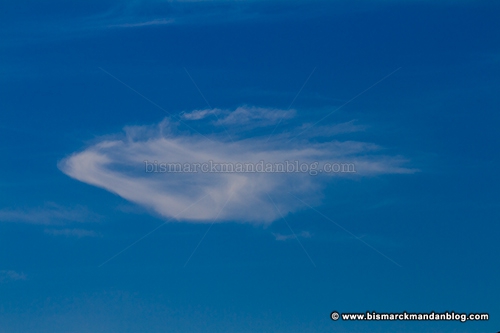 This and the first one are from tonight. 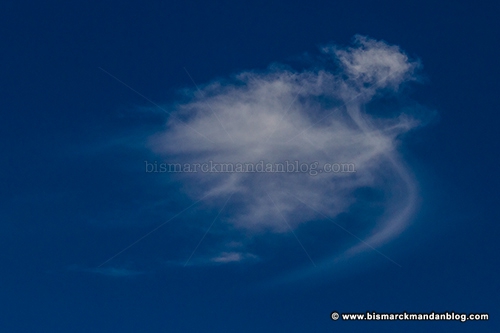 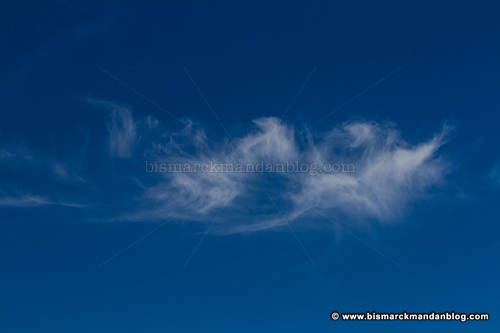 There have been a lot of really unusually shaped clouds lately. 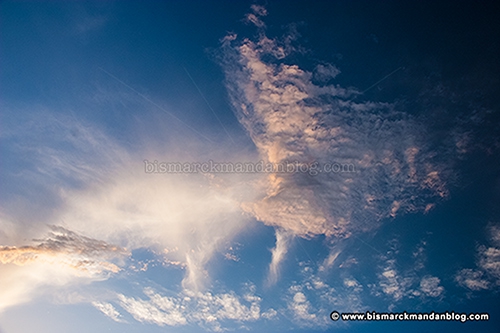 I’m going to keep watching for more, and share them here when I find them. 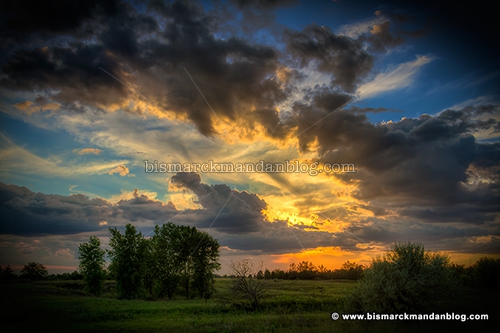 This is the kind of photo that you want to edit while listening to Joel Porter (which you should do anyway).  We had a spectacular sky leading up to sunset tonight, and I was way out of position when I noticed it. 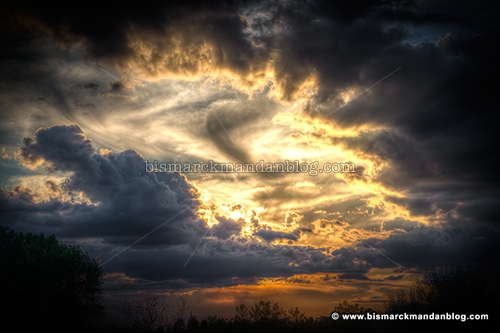 What had really caught my eye was this blazing hole in the clouds, and the swirling wisps behind it.  I pulled to the side of the road, found a gap in the tall chain link fence in my way, and started snapping some shots before the clouds shifted too much. 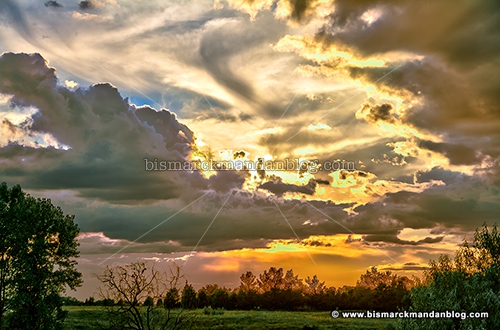 And it did within the span of a couple of minutes.  The sun moved into this little window, and the various clouds morphed and drifted until the hole was completely gone.  But I’d caught what I needed.

I’m not always so lucky.  Last night, while trying to get home with four TCBY waffle cones for my family still intact, I just barely missed an amazing cloud in the east.  So it was nice to be able to catch this.  A friend texted me that he was taking his camera down to the river to catch the coming sunset, but I went home to watch it on the deck with my wife.  That’s one of our favorite things to do.  I’d been on the road for work all day, and just staring up at the sky without having to try to capture it in a photo was some nice R&R indeed. 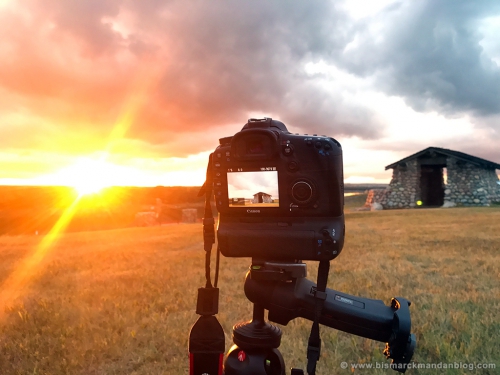 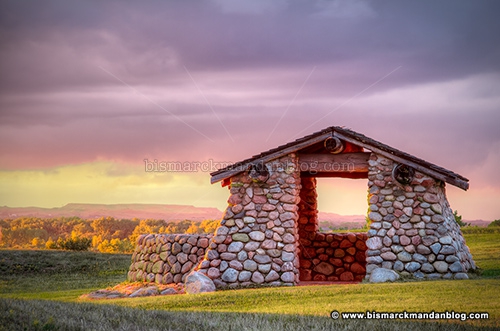 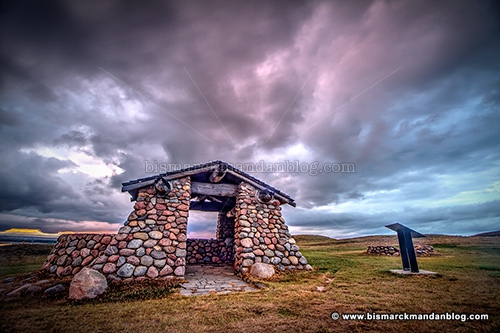 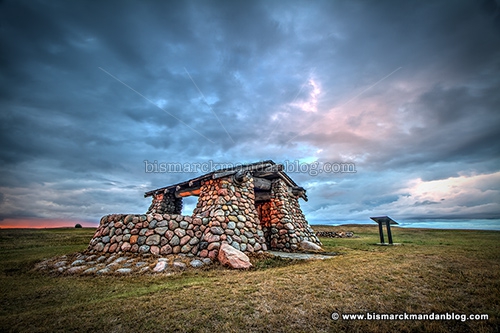 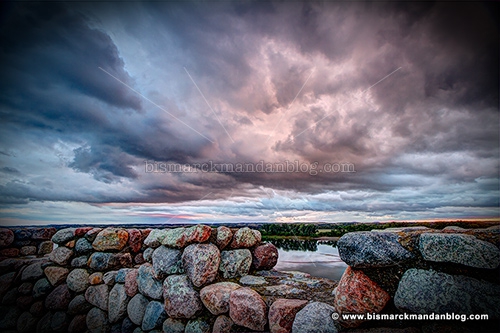 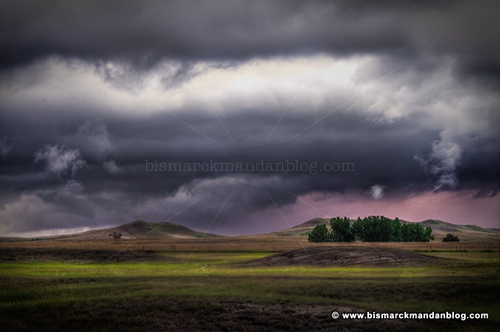 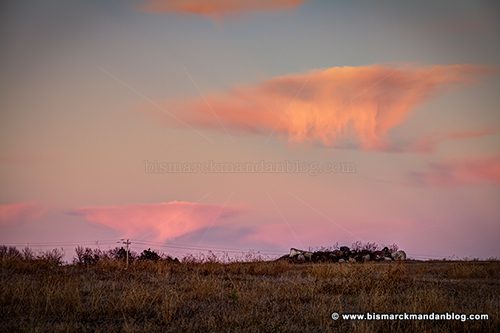 A couple of nights ago I saw these really wild clouds east of town, and had to snap a photo once I got home.  They remind me of jellyfish in a way…tendrils hanging down and all that.  Or perhaps something from a science fiction feature? 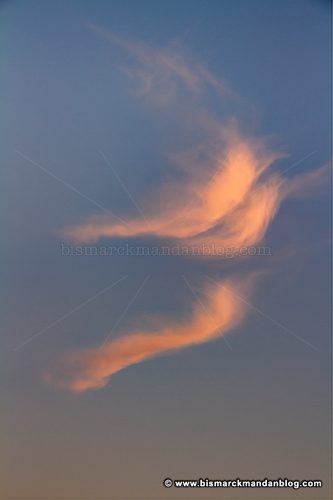 These reminded me of birds, perhaps blue jays.  I got home just in time to catch some golden light reflecting off the clouds, so they looked even more dramatic.

Work and stuff is so chaotic right now that I haven’t had much time to chase any sunrises or sunsets, so to catch these clouds at such an opportune time was a really nice break! 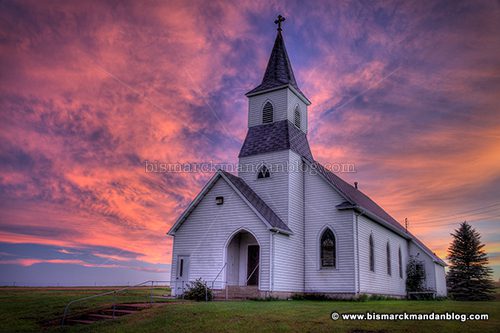 I camped out by this former church in Morton County to allow the sunset to do its thing.  A row of storms had just moved through, and I had correctly guessed that the clouds tagging along the tail end of those storms would provide a lot of color to the sunset.  I was correct.  But I wasn’t done just then… 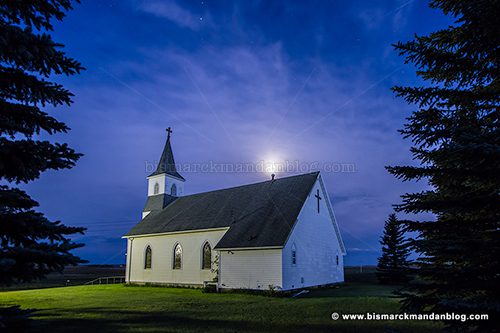 Waiting for the sun to go down and the moon to come up gave me the opportunity to capture some different clouds, albeit with stars sprinkled in as well.   To top it all off, my friend Zach and I headed out to a different prairie church, the one I wrote about a couple of days ago. 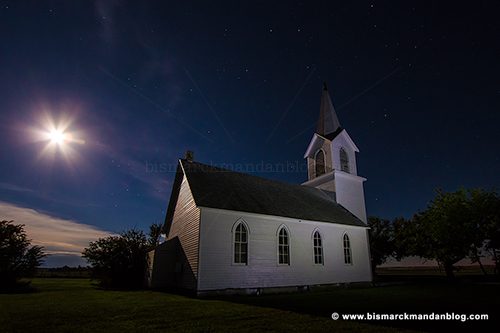 I don’t even remember how I located this old church, but it had to do with Google Earth and Garmin Mapsource.  This little church is in the middle of nowhere, not on a main road, surrounded by trees, and absolutely wonderful.  I had another old church to explore at sunset, so this one became a twilight target. 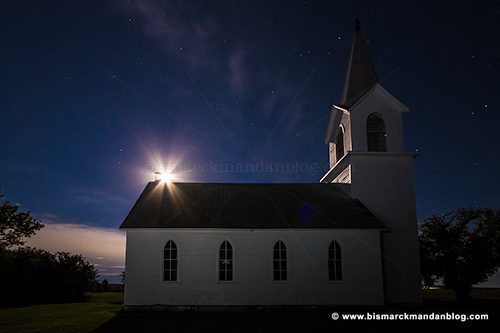 It’s a remarkable little building…while not fenced or posted, it looks privately owned.  I didn’t even consider going inside, although looking through the windows showed an intact structure with a choir loft, pews, and everything.  How fortunate the owner must feel! 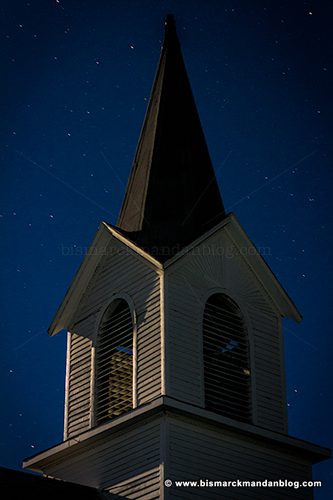 After some long exposure shots it was time to head home.  I had a flat tire in my near future, a blowout actually, but I didn’t know it.  Thankfully that waited until I was in city limits, although still on I-94.  That made for a later night than planned, but I’m sure glad I was able to explore this awesome find! 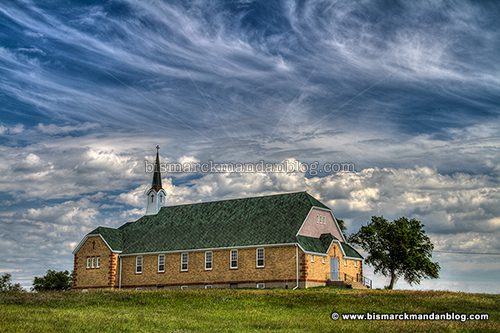 I actually took this photo a month ago while roaming Morton County.  I was on my way back into town and found myself northwest of Mandan, so I decided to stop over and catch some shots of this church before bouncing down a section line.  The clouds were pretty remarkable, giving an excellent background to this place of worship. 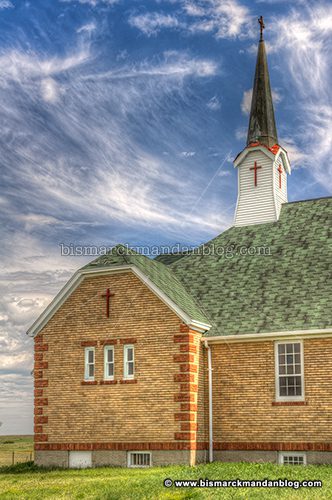 I’d had a fruitful day with the camera, but when I had the combination of this church and this sky to play with, this was one of the most fun stops of my entire day! 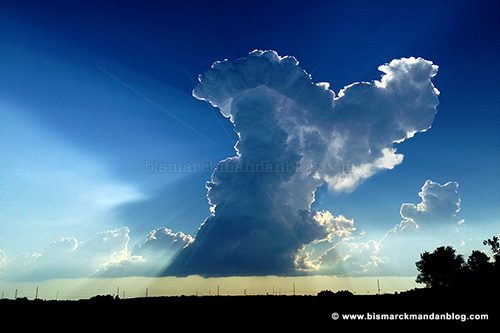 We were treated to quite a show here in Bismarck-Mandan tonight.  I was on the east end of Bismarck when I spotted this building cloud to the west.  The sun had just moved behind it, making that “silver lining” glow like a bolt of lightning.  And oh, the rays! 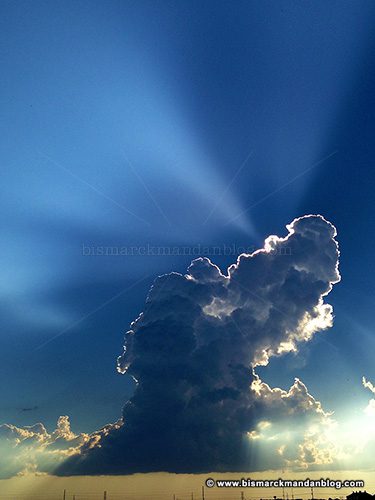 My little boy thought it looked like God was playing hide and seek behind the cloud, and I couldn’t argue that assessment. 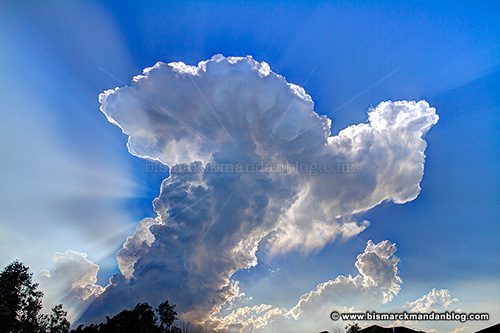 Before long it was in full bloom and moving overhead, so I grabbed my camera from the back of the truck (the previous photos were from my iPod) and snapped one more shot before the cloud dissipated even more.