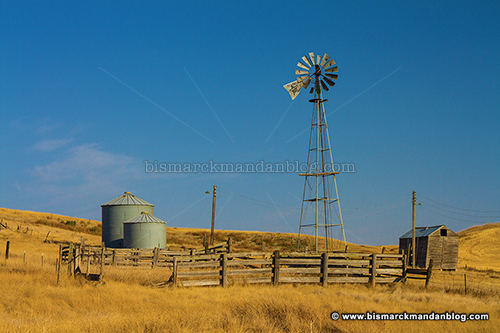 Because I can tie an old windmill to just about anything, here’s a shot of an old abandoned farmstead that I located just south of Watford City on Highway 85. There…I think I’ve made my rustic windmill photo quota, so here’s my interesting story about the past several weeks in Bakken Country.

We’ve all heard the horror stories about the Wild West: the crime, the traffic, the overcrowding. I don’t doubt that many of those growing pains, and many of the reports thereof, had basis in fact. Oil production in Bakken country has slowed somewhat recently for a number of reasons, and perhaps that’s why my experiences there departed slightly from the tales.

My first impression of Williston was that sure, it was crowded with heavy traffic…but their equivalent of State Street, the divided Highway 85 that runs north out of town to Highway 2, was completely closed down on the southbound side for resurfacing. Of course it would be crowded with half the roadway available. In fact, I was able to get served faster at McDonald’s in Williston than I have been in Bismarck lately. While working with the security manager at the facility I was in, he gave the following advice: “Oh, sure…it’s not so bad here. But you should see Watford City!”

The very next day I found myself working in Watford City. I needed some accessories to build some 50 amp power cables, so I stopped in at the RV store located at the busiest intersection Watford City has. I noticed that I had no problem getting in/out of his parking lot onto Highway 85, despite a lot of traffic. It just wasn’t as bad as I’d been told. “Oh sure,” said the owner. “…it’s not so bad here. But you should see Williston!”

Now just a doggone minute here. The person I spoke to in each town thought the other one was the madhouse. In neither case did I see the kind of problems that I’ve heard so much about. Of course I’m sure traffic gets insane when there’s a blockage on the road…but I have spent dozens of hours on the road in northwestern North Dakota and never experienced any such issues. I’m not saying they don’t exist, I’m saying they’re not a 24/7 phenomenon.

I know that the medical system and first responders are overwhelmed in the area. I acknowledge that many aspects of life have seen great upheaval since the boom took hold. What I suspect happens, however, is what I call “REO Speedwagon Syndrome”: the tales grow taller on down the line.

By the way, if infrastructure is so far behind, and they can’t afford to catch up, then why in the world is Williston breaking ground on a $70 million recreation center? Is that the greatest need, or do they simply have a fetish akin to the Bismarck City Commission’s? I think it hurts their cause when they claim they can’t keep up with critical needs but they certainly have more money than you or I will ever see to start building indoor pools.

Of course my limited time up there didn’t give me the chance to see the whole picture. Again, I acknowledge the upheaval northwestern North Dakota has experienced. I also acknowledge that we can’t believe everything we hear about the Bakken boom without experiencing at least a little bit of it for ourselves.