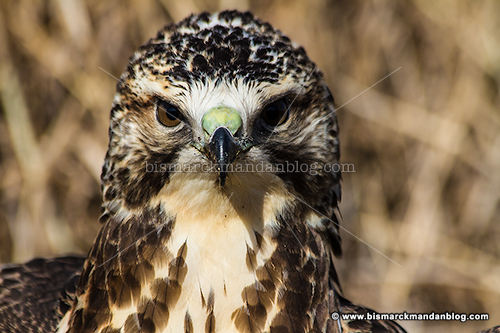 I got some of my closest photos of an enormous hawk a couple of weekends ago while on a roving photo trip. I was able to slowly approach within several feet of this big guy, although that’s not how he would have preferred it. He even stayed uncharacteristically still for me, and there wasn’t even a fresh kill nearby that he was trying to protect. In fact, he was trying to protect himself. 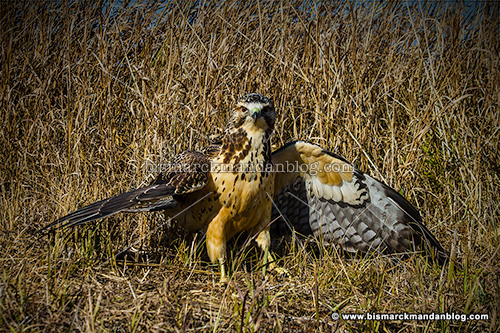 Sadly, this bird has a broken wing. I noticed him standing beside the road as I drove by and, since that sort of behavior is peculiar and I love trying to get close-ups of hawks, I stopped and got out to investigate. That’s when I realized why this predator wasn’t flying away like dozens of others who’ve seen me approach with my camera: it couldn’t. This would be an amazing pose if it didn’t mean he was wounded and trying to look intimidating so I’d go away. 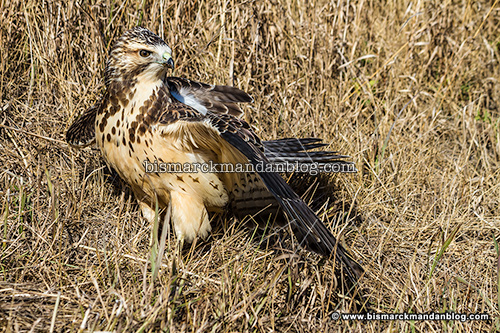 Many of you know that I’m particularly sympathetic to birds, even lean, mean, killin’ machine birds, but I was unable to do something for this one. I was out in the absolute middle of nowhere, totally unequipped to try to catch him and take him to the zoo or somewhere, and nobody to call. I took a few pictures while talking to him for a bit, and then he vanished into the tall grass behind him.

I originally thought this bird had been shot, but didn’t see any sign of a GSW. The wing simply looks broken. At first it was really exciting to be able to get so close to such a large and elusive critter, but in the end I just ended up feeling sad at its plight and my own inability to assist.