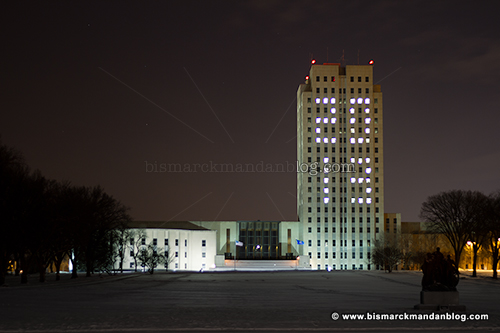 We spent New Year’s Eve at a friend’s house with a ton of folks from church, then came home to put the little ones to bed before midnight. I figured I’d just snap my capitol shots after dark on New Year’s Day. That didn’t go entirely as planned, however.

First it was snowing, which on a long exposure can ruin a shot. Then, once the snowfall tapered off and I ventured out, the wind picked up. Again, that’s devastating to a long exposure. I did finally catch a brief window of calm to get my rather generic 2013 shot.

I wanted to be all creative…after all, I’ve been discovering new angles all around the capitol grounds lately, but the cold and wind shut me down. I’ll try to brainstorm something for 2014 instead…and take the first opportunity to photograph it, not the last.

Now the windows will return to normal until Independence Day!