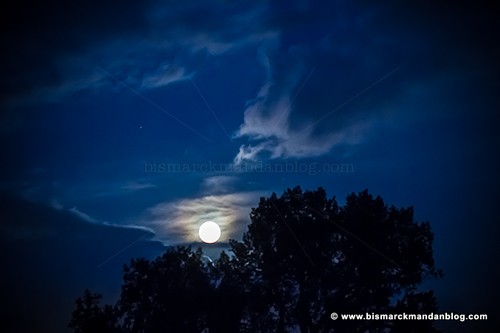 Several nights ago a photo pal and I went out to catch the sunset.  It came together rather suddenly and with very little time before the sun actually set, but we hastily set out to see what we could capture.

We were heading toward a little spot I’ve rediscovered north of Bismarck, but due to time constraints we stopped at Double Ditch instead.  The sky was ready to deliver an amazing sunset, with brilliant colors already developing and dramatic clouds.  That’s when it happened: two opposing clouds crossed each other from our perspective, essentially covering the sun and snuffing out the aforementioned brilliance.  Bummer.

We made the best of it (in fact, my last post came from this trip) and came away with some pretty cool shots.  Then we saw the rising moon behind us.  We had an idea for another familiar spot down the road with that moon in the background, also dancing with some dramatic clouds, so we hopped in the Monster Truck and headed back that way.

That’s when it happened: in exactly the same fashion, two clouds scissored together and sliced our beautiful moon from view just as we were rolling up to our stop.  Really.  We hiked a little anyway to see if something would develop, but all that we got for our efforts was a few dozen fresh mosquito bites.

The trip home involved a stop at the Hoge Island boat landing parking lot.  There wasn’t much to see…or was there?  The moon began to peek out, and there was an interesting line of trees…so, what the heck.  We hopped out in the middle of the gravel parking lot, set up the sticks, and took a crack at it.

We had a brief moment of luminescence in the clouds and an unobstructed moon before hopping in the truck and making our way home.  I often say that any photo trip resulting in even one pleasing shot is a success.  This one, bug bites and all, certainly fit that category.  When you’ve got the fellowship of a dear friend, even coming home empty handed would be just fine, too.