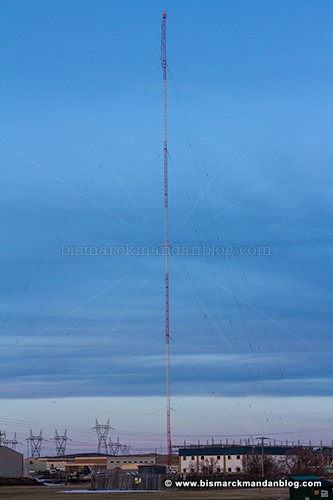 This little bugger is known as 1059580, which to the average person is KBMR 1130 AM.  It sits over on East Rosser Avenue, right in the backyards of some Bismarck residents.  And it’s putting out 10,000 watts of your favorite country classics.  Unfortunately it’s putting it in some rather troublesome places.

Anecdote: when I was working at a local TV station years ago, our on-air talent began complaining that they were hearing “country music” in their IFB earpieces.  At first we thought they were nuts (after all, they are broadcasters) but eventually had to switch to wireless earpieces.  One of the station engineers figured out that the offending signal was coming in through the power lines.

I recently came across this situation again with an audio mixer that proved susceptible to this phenomenon.  When I’d adjust the microphone preamps I would be treated to a twangy jam instead of the audio source on the other end of the wire.  I ended up switching to a different mixer to get rid of the result.

I’ve also had instances east of town where I couldn’t leave a microphone cable on the concrete floor without picking up KBMR and had to switch to wireless.  What a joy.

A friend of mine who used to work over by the Coca-Cola plant said he could hook up to his filing cabinet and get his dose of the classic country.  I don’t know if he could feel his teeth tingle, but maybe that’s just reserved for the people who live right next to this tower.

I’m just a layman and possess no engineering or electrical degrees, but I think I know the issue: 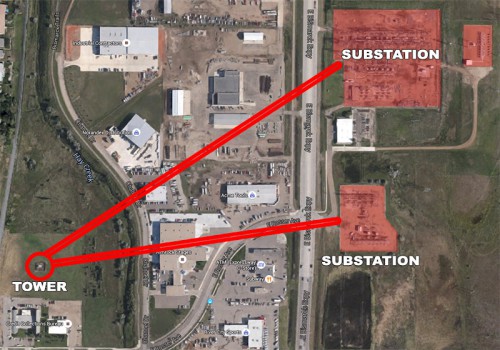 The image above shows KBMR’s tower, which these days is located behind the studio building, in relation to two big electrical junctions: the Western Area Power Administration and Montana-Dakota Utilities.  Remember how I said the engineer traced the interference to the power coming into the building?  By the way, those are people’s homes in the left edge of the photo.

What I’m wondering out loud is whether it’s a good idea to be throwing 10,000 watts of radio frequency energy into the local electrical grid.   In one of our trucks, if I drive alongside the power lines on the south side of Century Avenue, KBMR even bleeds into KFYR 550 AM.  Not an ideal situation.  It seems as though being adjacent to two substations turns the electrical wires into a giant antenna array.

My understanding is that KBMR’s daytime tower (they go low-power at night) used to be east of Menoken.  When Anderson Broadcasting began building 710 AM KXMR, they moved all operations of KBMR to the in-town stick and used the Menoken tower as part of a directional array for 710.  I can’t find an online paper trail of this using the FCC’s page, because their site and search aren’t very intuitive.  But that’s my foggy recollection. 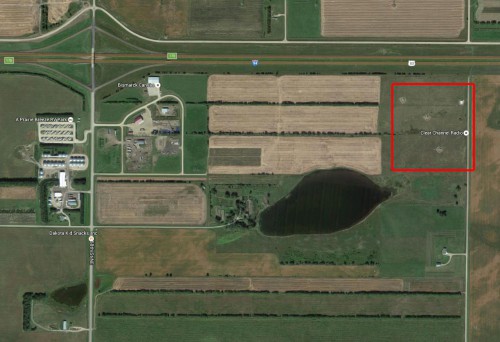 My contention is that if KBMR’s full-power signal was beaming 10,000 watts on 1130 kHz from this site east of Menoken, people wouldn’t be picking up Merle Haggard in their dental work and houses on 35th Street wouldn’t require filters on their telephones.  But that’s just me… I’m just a simple caveman when it comes to this stuff.  As a video professional, though, I sure wish I didn’t have to chase this signal out of my microphones when recording within the Bismarck city limits.  I grew up listening to classic country & western music with my dad, but there are times I wish it would only come out of my radio and nothing else.