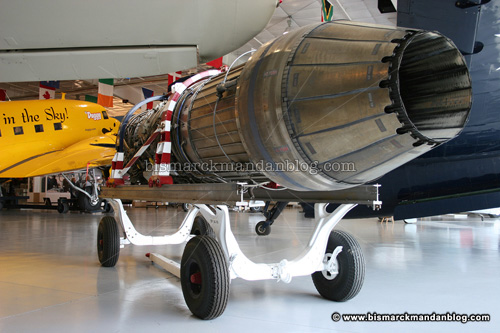 I wonder if they make a Suzuki or Kawasaki interface kit? This engine is on display at the Fargo Air Museum, which I visited after a freelance job recently. I believe this particular engine may have come from an F-4, but that’s just a guess. When I went to NDSU they flew F-4s in Fargo, and I was able to get some extremely fun time on/in one. I haven’t been any closer to an F-16 than your average airshow patron, however.

There are lots of other engines, planes, and memorabilia to explore at this museum, including a library of aviation books and periodicals. There are plenty of aviation geeks on hand, too. I use the term “geek” in a good sense…there are motorcycle geeks, photography or video geeks, and many other kinds of geeks. We can spot each other a mile away. Geeks tend to know as much about their field of interest as an avid sports fan, and can rattle off airplane facts as if they were quarterback stats.

I’ve wanted to visit this museum forever and never took the opportunity. So, when the TV station I was working for got me a hotel room for an extra night, we ran around Fargo and played for an extra day. Yes, I took my wife with so she could hang out with other TV wives while we were broadcasting college football. That made the weekend into a paid vacation of sorts!