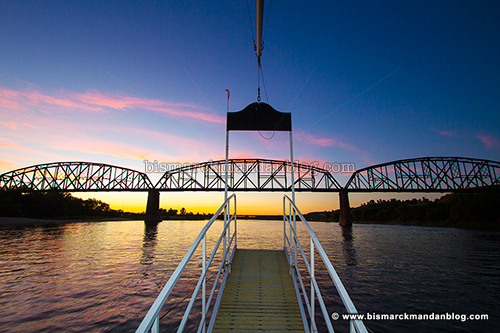 My precious, sweet wife and I recently celebrated our ten year wedding anniversary. The timing wasn’t right for an elaborate vacation, but we did one better: we took our little guys on the Fort Lincoln Trolley and the Lewis & Clark Riverboat, with a picnic in between.  One thing that made it more special is that, aside from the riverboat cruise, I left my camera out of the picture (pun intended).

Getting the shot so often detracts from enjoying an event, something I know all too well due to the nature of my work.  For instance, I can’t count how many time I came home from running Instant Replay or directing a live sporting event show, unable to tell my wife who won.  It’s the nature of making things look good for others.

I’ve got plenty of photos and video from on board the Trolley anyway.  We did take a photo of our picnic, because it was at the location where I initially proposed to my then-girlfriend.  I was free to enjoy the afternoon and the evening.  I even brought a little Bluetooth speaker so I could dance with my wife on the Riverboat while Captain Jeff Bathiany, the coolest riverboat captain around, allowed my boys to join him and his dog in the cabin and pilot the boat.

There was one shot, however, that I really wanted to have.  Thankfully the two-up seat at the front of the boat was available, and as the boat chugged its way home I was able to quickly set up my tripod, frame up my shot, and let the light and the bridge come to me.  I also took a nice photo of my sweetie, too, but I don’t post photos of my family online.  The shot above, though, I’m eager to share.