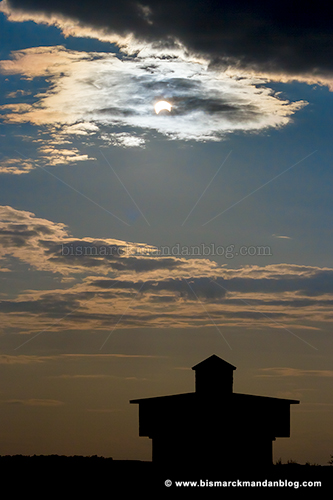 My boys and I ventured out to Fort Lincoln on the night of the eclipse to see how visible it would be. I don’t own a welding helmet (yet) but figured I might still be able to get a good shot if the cloud cover helped a little bit. It did…sorta. Things were still bright and I found myself wishing for a ten-stop neutral density filter. I ran out of patience and we took off, perhaps a little early, but I felt like it was pointless trying to get a shot while so ill-equipped.

I looked at this shot tonight from the beginning of the eclipse and it’s actually not that bad. If I’d waited a little longer for the sun to approach the horizon, backed off a bit to bring the blockhouse and sun closer in size, and waited for the clouds to roll and the eclipse to proceed more fully, I might have had something. This photo isn’t a total loss, but sadly it’s only a hint at what could have been.

We did run into some folks who had built a neat pinhole viewer out of a long slender box with a window cut in the side. It made it very easy for my little guys to see the eclipse while not being tempted to look at the blinding sun. As a photo trip it was only a partial success, but I think as a father-sons trip it worked out just fine.