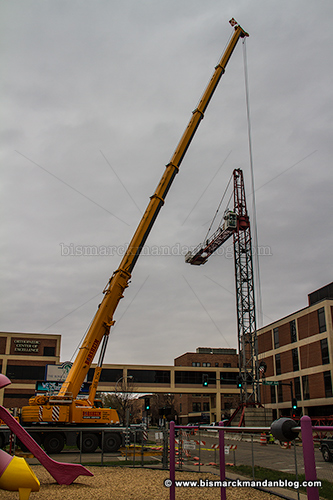 Two days in a row I was treated to views of people lifting very, very heavy things with machines that look right out of my boyhood Matchbox collection.  This time around was actually a crane lifting a crane, as the sections of a big tower crane were assembled for some ongoing work at St. Alexius. 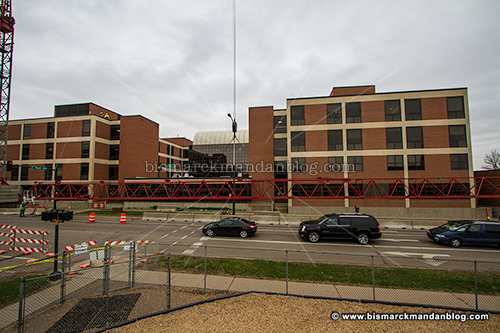 By the time I’d taken the first picture in this post, they had already attached the main part of the crane to the tower.  That just left this 200-foot boom to attach.  It was assembled in pieces on a set of stands, which had to be detached, and then carefully lifted without getting snagged on the tree (right), hitting the stoplight (left), or getting hooked on the streetlight (center). 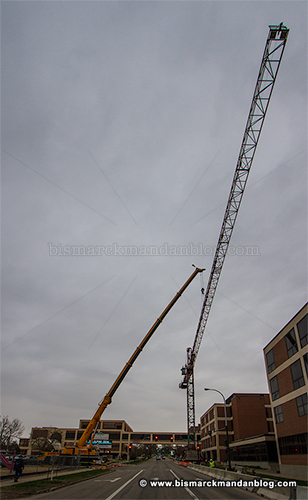 That’s not distortion in my lens, apparently.  I could see the boom of the yellow crane bow visibly under the weight of its payload at that extension.  I pointed it out to one of the crew and he saw it too, so either we’re both nuts or it actually bowed a bit. 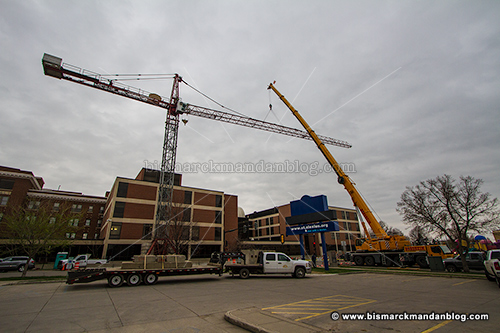 This is an enormous undertaking, but I’m told that this tower crane will have plenty of work to keep it busy this summer.  In order to even erect this crane, footings had to be prepared for it to be mounted.  It’s self-supporting with no guy wires or anything, so its stability has to come from deep underground.

I actually have some more really neat crane footage that I shot years ago that I may have to re-share here.  I’ve got a lot of respect for these operators, mostly because I could never be patient enough to do their job.  It obviously takes a cool head and a lot of focus to be in control of these cranes, because one mistake could be very expensive and possibly fatal.

So there ya have it…after a long dry spell, I got the camera out of the bag two days in a row!  Not a bad way to round out the week.