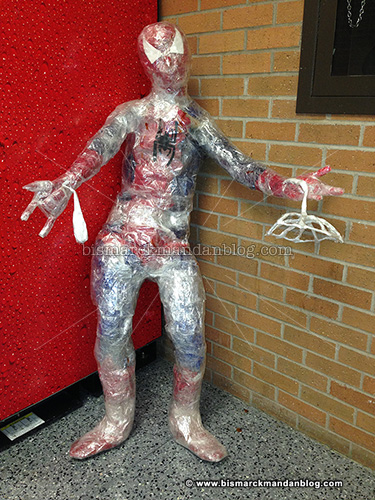 I was up in Minot last night as part of one of the video crews covering the Century-Minot boys’ basketball games that evening.  Man, were those two INTENSE games.  After initial setup it was time for a Fuddrucker’s run (it’s ALWAYS time for that).  As I rounded the corner in the commons area, though, I was confronted by our friendly neighborhood webslinger. 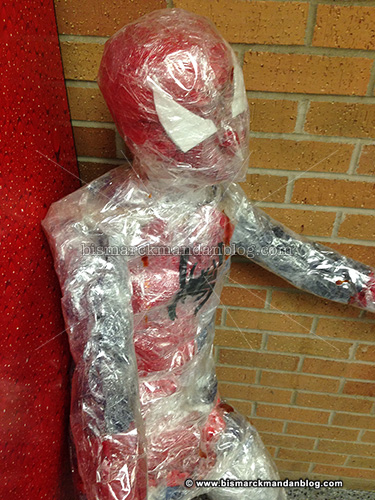 It looks like Spidey was made from recycled streamers or other pep club materials, plus a lot of plastic and tape.  In any case, it was an admirable rendition.  No explanation as to why he was there, though. 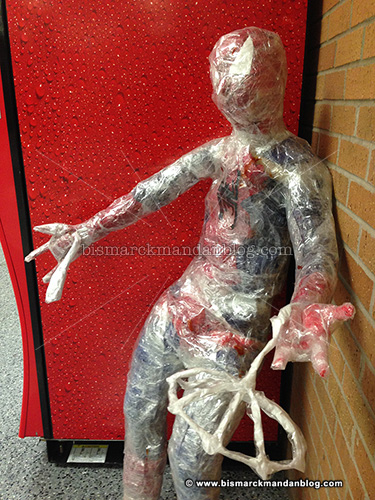 My compliments to the sculptor(s) of this tribute to my favorite Marvel superhero.  The web was a nice touch, even getting his fingers in the right position to match the way he’s drawn in the comics.

You never know what you might find when you come around the corner.  After all, I encountered the Batphone in an armory in Dickinson two years ago! 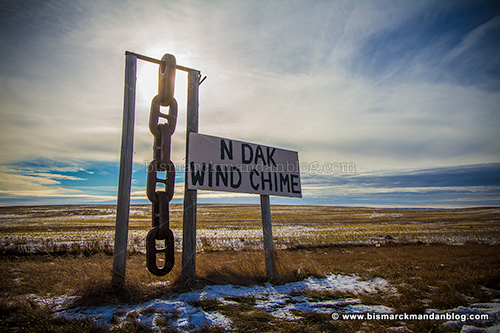 I’ve wanted to take a photo of this oddity for a long, long time.  I actually got an opportunity today while on the road for another errand in western North Dakota, and researched the odd route needed to reach it.

This and a couple of other items reside along the south side of I-94 west of Glen Ullin, but one has to take a long route to the north to reach them, cutting back across a county road to an overpass and a frontage road.

I guess I can finally cross this off my photo bucket list!  It’s interesting to note that as I bracketed exposures to deal with the harsh sunlight directly behind it, I caught the chain actually swaying slightly.  I don’t recall the wind being that strong, so maybe it was residual motion from my little boys climbing to the top of it.  I guess I’ll never know. 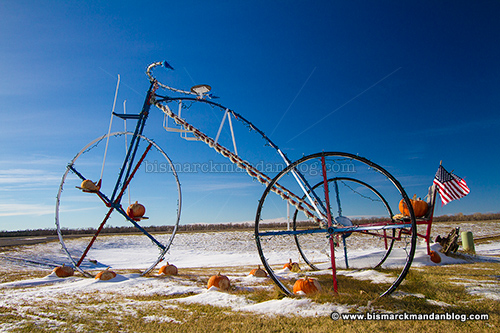 If I tell you that these are full sized pumpkins, would that help you understand how large this trike is?  It’s north of Bismarck, and there’s no way you’re pedaling anything from that seat way there.  The long poles coming from the “pedals” on the front wheel look intriguing, though… 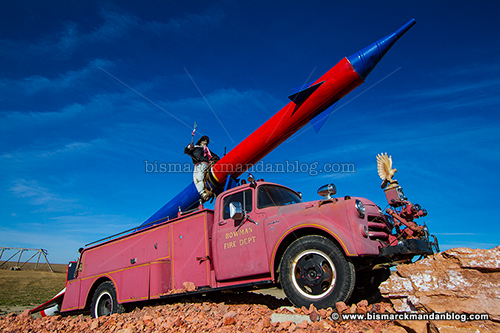 I’d like to take a moment to kick off the weekend with a dude astride a rocket perched on a fire truck.  You’re welcome. 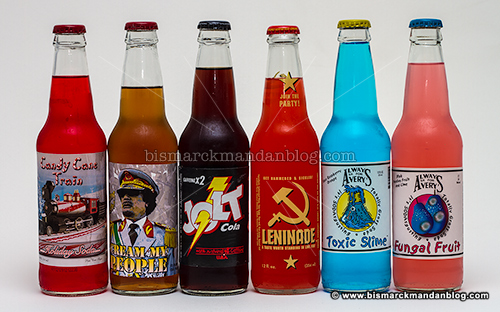 I’ve been on a novelty soda kick lately, as the above photo illustrates. The types I’ve spotted around town range from Christmas-themed to absolutely bizarre, such as the Qadaffi and Leninade sodas, and fun like Avery’s disgusting soda line. Of course we can’t forget good old Jolt Cola – sugar and caffeine, baby! By the way, many of these sodas actually use pure cane sugar instead of the high-fructose corn syrup used by the big soda companies these days. 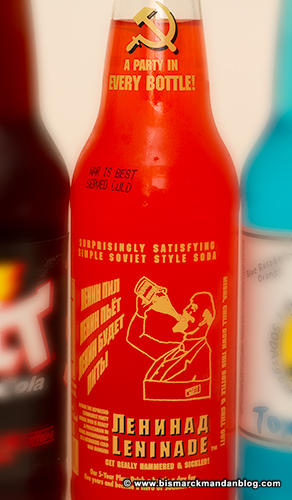 My favorite so far is Leninade (here’s their website) – it’s the best tasting, and as a bit of a cold war buff I get a kick out of it. I bet Reagan would sip this stuff cold if he was still with us today! There are plenty of humorous bits in the label and the inside of the bottle cap as well.

These sodas are awesome – some for their novelty, some for their taste, and some for both. The best collection I’ve seen to date is at Runnings, although there are a bunch at Mac’s Hardware as well. Mac’s used to have an enormous display of these, but now they’re down to just a single refrigerated case.

If you spot these sorts of sodas around town, please let me know! 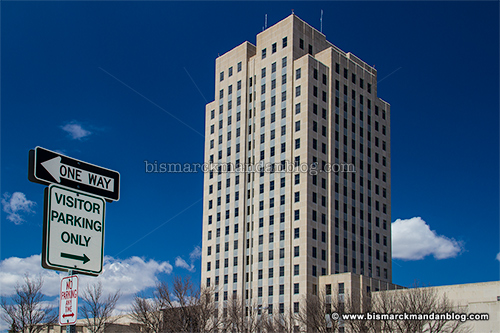 This sign could work well as a picture metaphor of the state legislature and property tax “reform”. They’re throwing hundreds of millions of dollars in “relief” at a problem which isn’t inherently theirs.

And yet they’ve managed to not only tie the noose of public anger at property taxes, but they’ve also stuck their head in the loop and tightened the knot. Meanwhile, the culprits behind high property taxes at the county level get a free pass without any accountability.

I’d expect another Measure Two type initiated measure to appear on the radar soon. In fact, while I opposed Measure Two on the last ballot I would certainly vote for the abolition of property taxes in North Dakota. I just saw the bad mechanics of the last attempt and didn’t want to put the state in a bind. If it had simply said “No governing entity may levy property taxes” I’d have voted yes. I imagine that a lot more people will be voting yes for whatever property tax measure hits the ballot, regardless.

I met one of my representatives for coffee back when Governor Hoeven got this ill-fated “reform” shell game started and pretty much predicted the debacle we’re facing now. I warned that the legislature will assume responsibility for the tax & spend behavior of the counties, and will be the bad guys in the eyes of voters no matter what they can and can’t do to relieve property tax burdens. Here we are.

Some days the legislature makes just about as much sense as the signs pictured above – and those signs would work even better as a descriptor of the failed transparency bills in this session, but I’m not going there…yet. 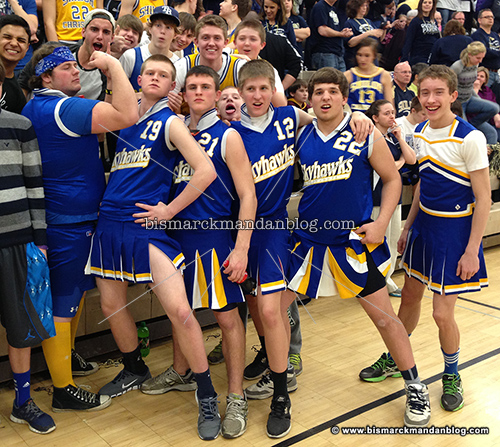 It was a nail-biter, but sadly the Shiloh Skyhawks girls’ basketball team did not come away with the overtime win tonight. It was a packed house at good ol’ Mandan High, and enthusiasm was running high on all sides.

Part of that high energy was the cheer team for the Shiloh ladies: these dudes. I don’t really know what to say about them other than that they took team spirit to the max, and offered ample support to the girls on the court tonight! 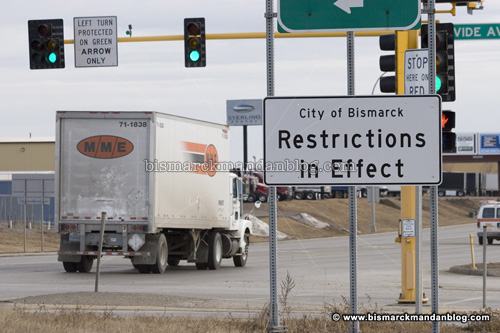 The City of Bismarck has put out a notice that load restrictions on the city’s roads will start next week. It gives me the perfect opportunity for a little good-natured ribbing over the “Restrictions in Effect” signs traditionally seen around Bismarck this time of year. Restrictions of what nature, you ask? If your only source of information was these signs, I suppose it’s anyone’s guess. 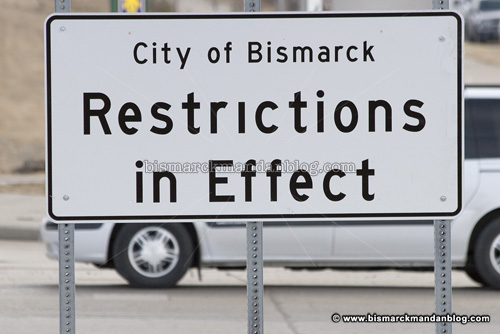 I first saw these signs go up a few years ago (and every Spring since) and thought they were pretty funny. It’s because of the load restrictions I mentioned, but the signs are omit that detail. It’s only after someone figured out what was missing (maybe they read this blog) and wedged a little “Load” in there that the signs made sense: 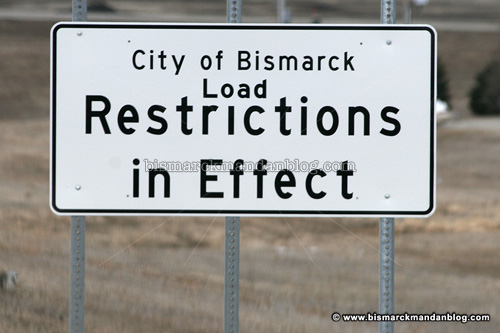 This is how the corrected signs look. I am still occasionally surprised to find an unmodified one posted. As you can see in this previous post, I was almost second-guessing whether I’d even seen the signs without the word “Load” inserted. If there are any of the original vague signs remaining, someone’s going to have to dig through a drawer for another “Load” sticker! 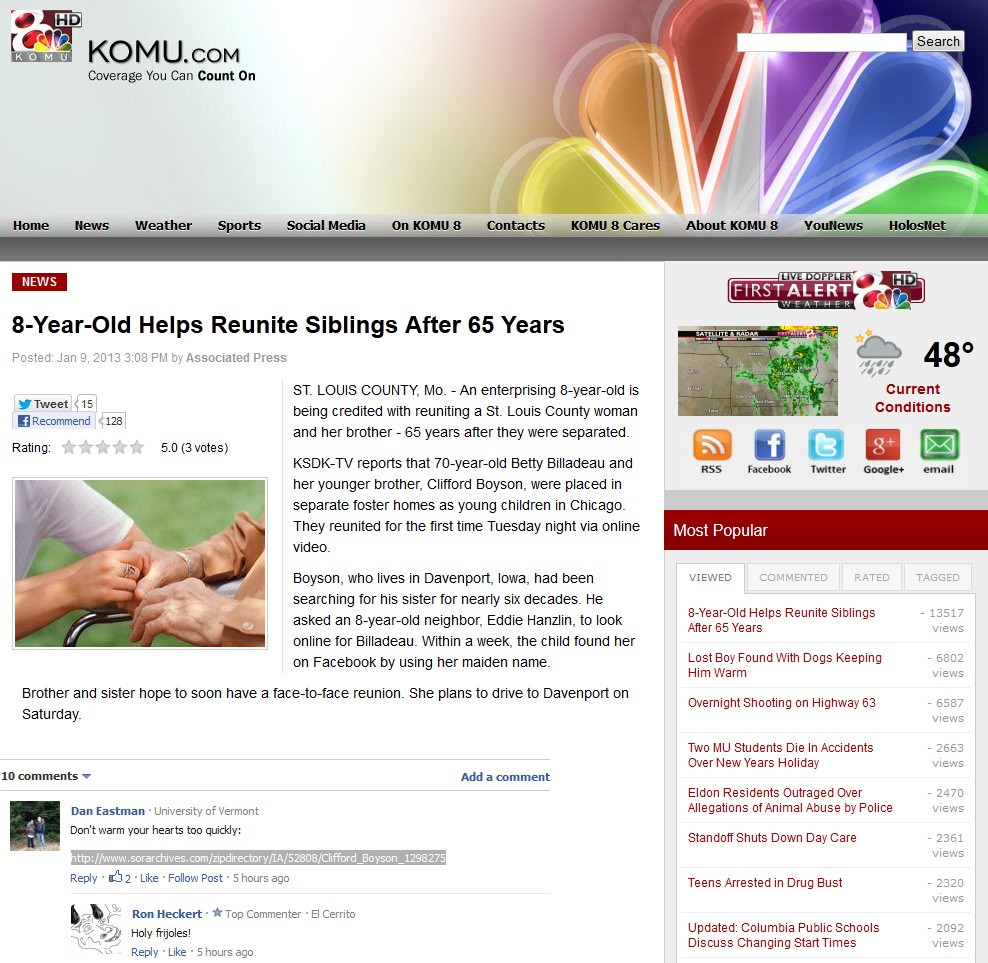 You can’t make this sort of thing up. First there’s the funny yet touching story of a guy spending decades to find a long-lost sibling, only to have an elementary school kid types her name into Facebook and finds her in an instant. Irony? Sure. Sappy? You betcha. Until you look at the top comment in the graphic above. Some savvy internet wizard did a cursory web search of his own and came up with: 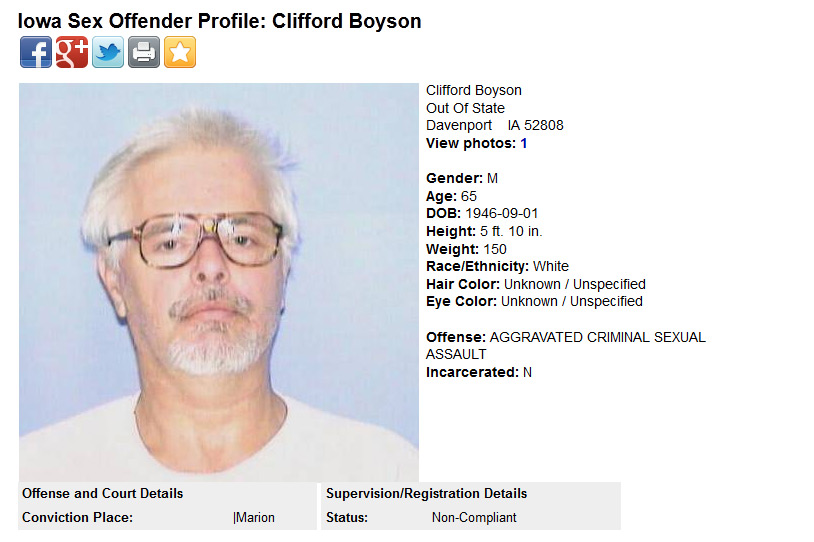 Yikes. Apparently the elderly chap’s got priors. Still got the warm fuzzies around your heart from the tale above? I always find AGGRAVATED CRIMINAL SEXUAL ASSAULT to be a major buzzkill. Assuming, of course, that it’s the same fella…the birth date appears to line up. Not that I want to spend another second pondering it. Someone out there made the connection, though, so the moment is ruined…even if they got the wrong guy. If the long-lost sister has done her own web search or read the comments in that article, I predict an awkward family reunion – whether it’s the right guy or not.

Ah, “teh Intarwebz”…is there anything they can’t do? 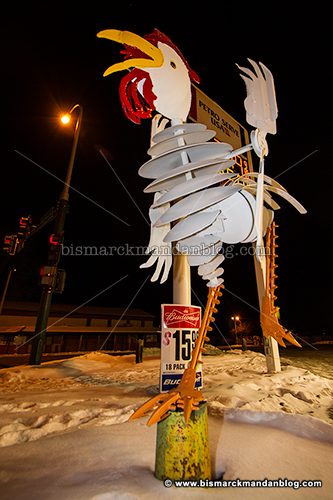 I don’t find myself in this part of Mandan often, but when I do pass the former Village Mart I always look for it: the metal chicken statue. I was surprised recently when I drove by, because it’s back after a lengthy absence.

The chicken’s hiatus began roughly around the time that the Village Mart, home of fond remembrances from my adolescence, became the Petro Serve. It spent some time in an unused part of the store and was even the target of at least one attempted theft.

Well, he’s back…and better than ever. After some jackhole damaged the chicken trying to steal him, he went in for some body work. There again he was almost stolen, as the trailer belonging to the people repairing him was also stolen. All of that having played out, he did manage to find his way back – and in better form than ever. In fact, the leading edges of those menacing spinning wings have been lined with plastic to avoid the unthinkable from happening.

I’m not exactly Johnny-on-the-spot with this news; employees I spoke to say he’s been back for a few weeks now. In any case, it’s good to see this local oddity back again, spinning its wings, tongue sticking out almost defiantly, sporting that red-crested smile of resilience.