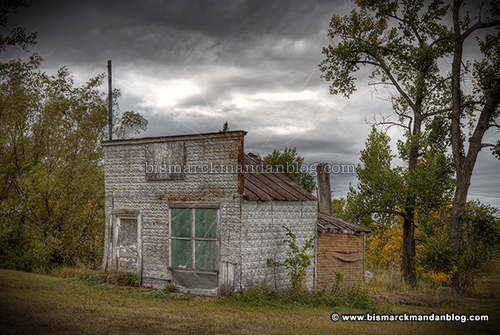 I took the kiddos duck hunting a while back and stopped in the small town of Denhoff to check it out.  I saw this quaint little building and thought I’d snap a quick shot.  Didn’t do much else for photography that day, or much at all recently, as I’ve been so busy and the weather hasn’t exactly been great.  I know there are plenty of opportunities out there, but right now I’m just so stacked I don’t know if I’ll be out there to snatch them. 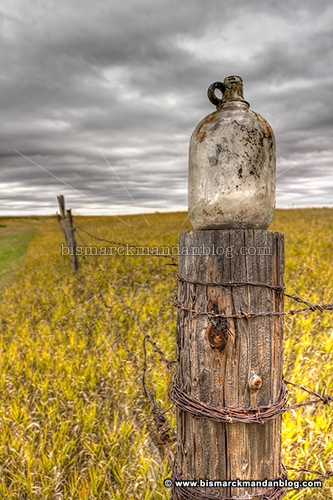 I found this jug up at Arena last weekend, perched atop the fence post at the corner nearest the old abandoned church.  I’m curious as to who found that lying around the place after all these years!

The old church has settled significantly, now that its supports have failed.  I’ll post photos of that soon. 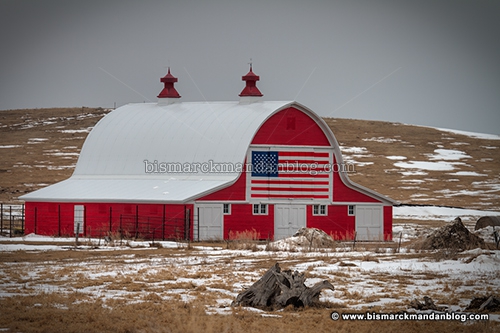 I love when I spot something like this.  The Stars and Stripes.  Old Glory.  The colors.  I’m proud of my country, and I love seeing patriotism on display wherever I go.  I think it’s something we take for granted here in North Dakota.  Thankfully I don’t live in a place where people claim the flag stands for anything other than the greatest country on earth. 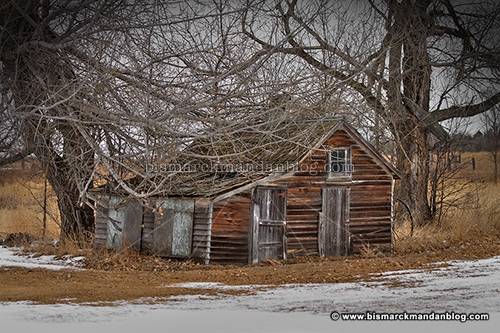 I decided to title this post from a pair of song titles by two of my favorite 80s bands, although U2 didn’t do Elevation until 2000.  This little shack is nestled in the trees of Venturia, North Dakota. 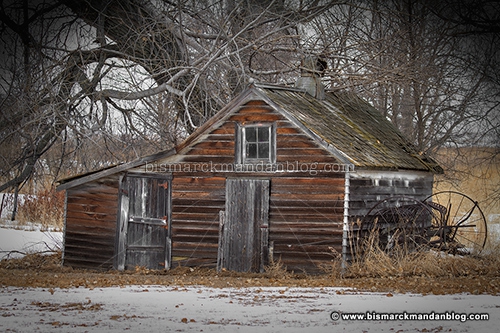 It doesn’t have the tin roof (rusted) from the B-52’s song, but it’s still a wonderful looking little place.  I found this down the road from my next subject. 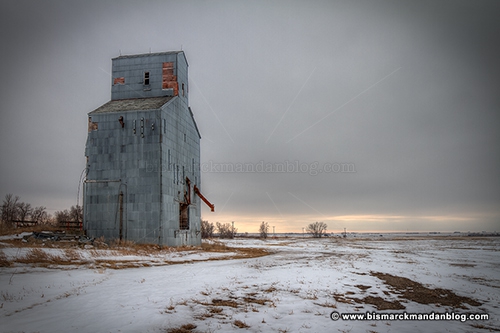 The sun was trying to punch a sunset through the clouds as I photographed this elevator, but it wasn’t having much success.  The overcast sky had just developed as I made my way into town. 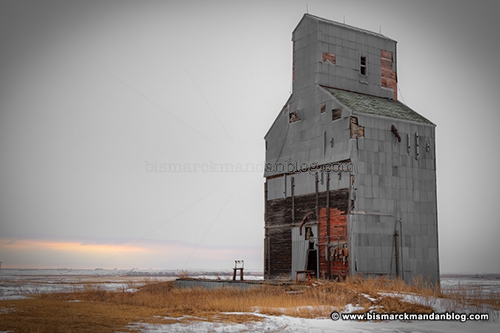 I had a willing subject, though…this elevator stood tall and made for some nice shots.  A gloomy sky actually works pretty well on a wintery day.

After visiting these two spots and roaming around town for a couple of minutes, it was on to my next spot.  Eventually I ended up at the Berlin Baptist Church I wrote about earlier. 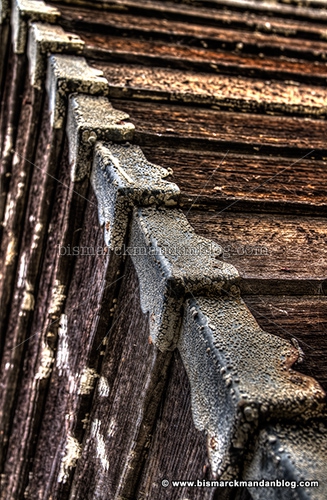 Yeah, that’s a song title reference I never thought I’d make.  This old corner is on a shuttered school house that my wife and I encountered on a recent photo journey.  The kids were at camp, so we got to run around with cameras until midnight!  Ain’t love grand? 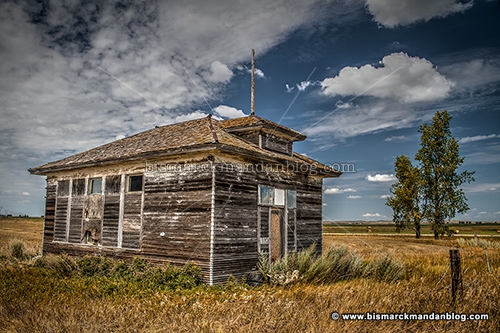 This is the old school house.  The corner is on the left of this photo.  We were actually just getting started when we came across this building, and it was the beginning of a very fruitful photography day.

I’m guessing it’ll take me into winter to start processing the photos I’ve been able to acquire over the summer.  I’d had some dry spells in recent memory, but this summer made up for everything.  I doubt I’ll be as busy this winter as last, so there will be plenty of time to share new images! 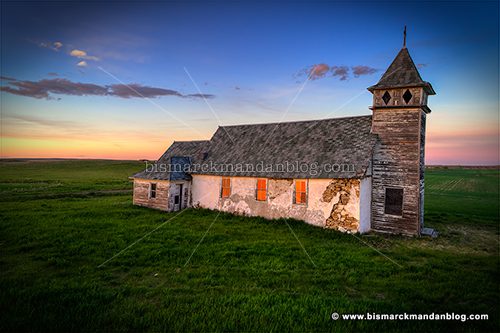 This was my destination last Friday as I meandered through the countryside, one of two destinations I’d planned to visit after taking off work a little early.  My wife teased me, saying that I would be home much later than the “just a couple of hours” that I estimated.  She was right…I got into position and, seeing the sky to the west developing in a way that was sure to provide a colorful splash at sunset, I couldn’t resist.  I put out my camping chair, got my gear ready, and waited.  I was not disappointed.  I even got the right angle to catch the sunset reflecting off the windows! 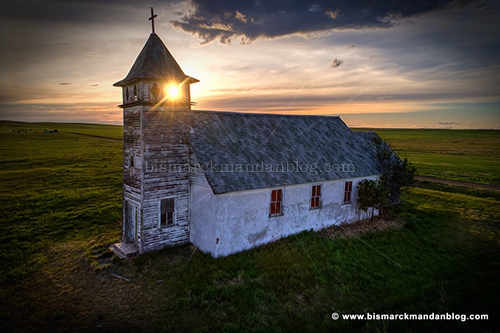 As for the other angle, you can see that it was a great sunset all around.  I was going for the color in the east rather than the blazing sunset in the west, but they both have their appeal.  I couldn’t help but try to catch the sun through the steeple. 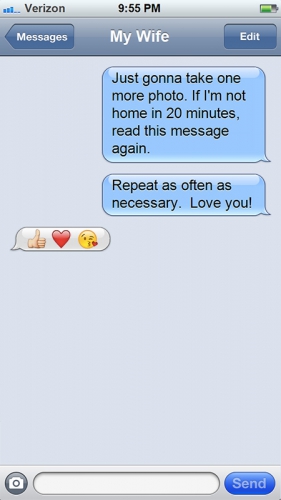 As far as that “just a couple of hours” thing – well, this image says it all.  I’m thankful to have a gracious and patient wife.  Being married to me should make her eligible for some sort of lifetime achievement award! 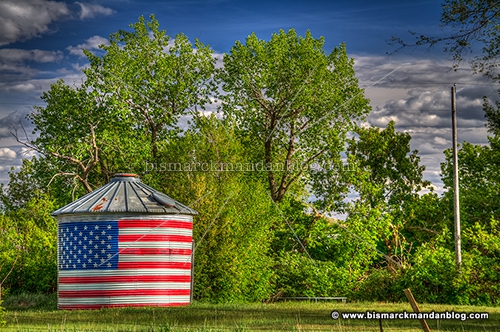 I love it when people display Old Glory respectfully, so I was thrilled to see this bin in a farm yard southwest of town.  It didn’t hurt that I had such vibrant trees and blue skies as a backdrop!  God Bless America. 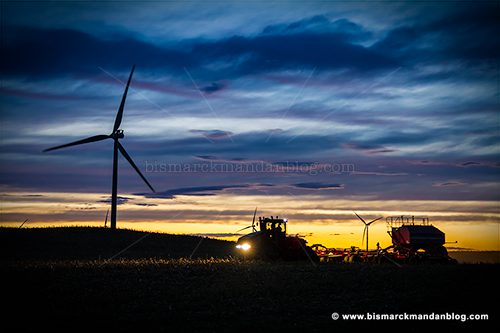 I got some GOOD photos on Friday, taking off work a little early and going roaming in the countryside. More on those later. But on my way home, having thankfully programmed an escape route into my GPS, I came upon these guys and had to stop and grab a quick shot of one of the operators. 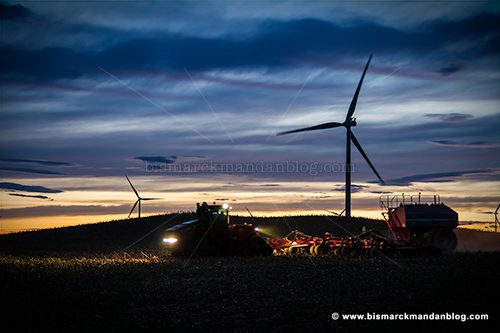 I’m not a fan of wind turbines, either as a heavily subsidized energy source or as the nemeses of the landscape photographer…but in this case, I thought they added a little je ne sais quoi to the shot.  I snapped a few and then proceeded to I-94 to jet home. 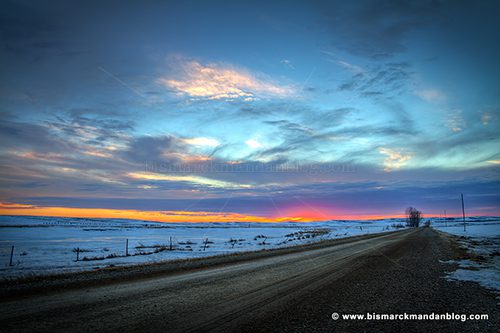 No, the title is not a Metallica reference.  In fact, a more appropriate word for the title might be whenever. I haven’t had many opportunities for photo trips lately, but I did get my garage Sheetrocked and lots of other big projects are coming along nicely.  I did try to get out this weekend for some drone flight, but strong winds seemed to kick up as soon as I got into position.  I marked a few locations for future flight opportunities and headed home, stopping to catch this sunset shot along the road as I was heading back toward civilization. 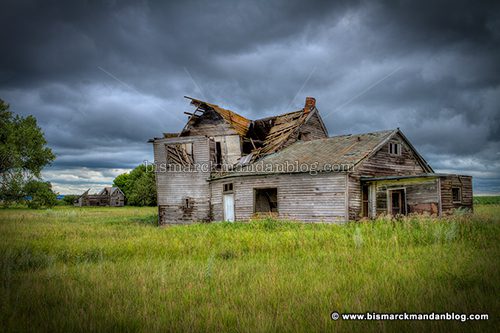 I had the opportunity to stop into a former North Dakota town, Aylmer.  I suppose that’s how Southerners like my wife say “Elmer”.  Anyway, there isn’t much to indicate that the town used to be there except for an old metal sign at the railroad crossing and a few deteriorating buildings. 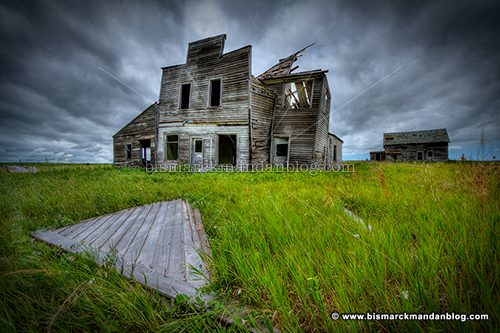 I remember reading somewhere that this was a combination general store, blacksmith, and something else at one time.  I’ve seen photos of it with the roof intact, but sadly those days are long gone.  Here you can see a piece of it which the wind has carried quite a ways from the structure. 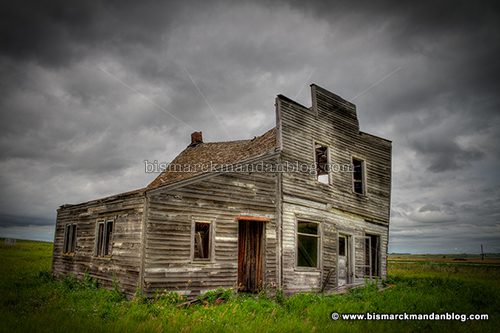 It looks like, and I think what I read backs this up, things were added onto this building as needed.  It’s a shame that it’s crumbling now. 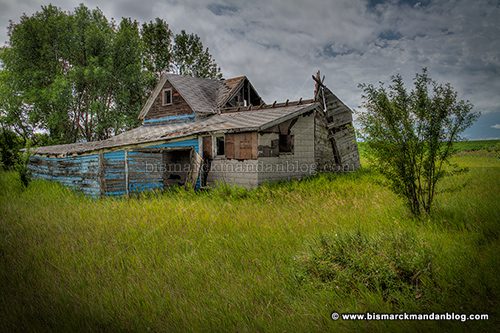 There are also a couple of other buildings within a stone’s throw, such as this house with a barn that still has patches of a brilliant blue paint.  It too is suffering from a rooftop deficiency.

This was a fantastic trip.  I had picked up my kids from camp in my new-used truck, which absolutely loves the back roads.  For the weekend I’d clocked around 950 miles, and this was the cherry on top.  At some point, although I’m busy as heck at work and with freelance stuff, I’ll have to show more from that weekend.  I still have a few more photo targets I hope to visit while we still have some nice weather!

A good name is rather to be chosen than great riches, and loving favour rather than silver and gold.