I know it’s now called Auto Value auto parts store, but it’ll always be Hedahl’s to me. When I go there for things like the absolute best floor squeegee ever, or paint supplies and gaffer’s tape, I always end up in the paint section.

When you go to the paint section of the store, you go through this doorway. What is cool about it, and I noticed this a long time ago but don’t remember blogging about it, is the sign hanging at the top of the doorway.

I suppose you have to be a King of the Hill fan to get this, but if you do…it’s hilarious. I got quite a chuckle out of it, but my kids had no idea what I found so funny. Inside jokes are the best jokes.

Naturally, you’d wonder what the sign will say on the way back out of the paint section. Well, you wouldn’t be disappointed.

Who doesn’t appreciate a good Christopher Walken reference? Now I’m going to have visions of him dancing in the video for Weapon of Choice, or perhaps even the hilarious Talkin’ Walkin podcast done by Kevin Pollack, I presume as an homage.

It’s great to see that folks around town have a sense of humor and a penchant for inside jokes!

I made it to Mandan briefly this weekend for a family affair, and accomplished something I’ve wanted to do for a long, long time: take a photo of the Brady’s Used Auto Parts building. It’s still shocking to see it in this state, as Brady’s has been a landmark for so many decades. Gee, I feel old.

The land is posted, so I had to take these photos through the fence. Thankfully I had some nice conditions to work with, and my hands fit through the rectangles in the fence just enough to work my phone camera!

One last pano to fit it all in. End of an era…

My fondest memory of Brady’s was when I pancaked the two driver’s-side rims on the $25 car I was driving at the time (long story) and he helped me pick out two replacements for ten bucks a piece. That seems like a lifetime ago, too. Man, I gotta knock off this reminiscing!

If you’re like me, you’ve been wondering when the plastic would be removed from the new sign at the south end of the capitol mall. Well, that day was yesterday. It looks pretty grand.

I got permission to go within the fence surrounding the area (there’s still some landscaping and cleanup to do) and get a close look at it. It should be pretty cool when everything is finished! Of course, weather has been – and is – a factor.

When the weather gets nice and it’s able to get a nice rinse, we’ll be in business. Now I understand what’s been going on underneath that plastic all this time!

The state seal of Best Dakota. You can’t tell in these photos, but it was awfully windy when I took them. For this one, the monument (it feels like a more appropriate word than “sign”) was a welcome windbreak. Brrrrr!

Homage to the old one: This is my favorite photo of the previous sign. But I didn’t take it. My wife did, with her cell phone. Remember what I’ve said about being in the right place at the right time? Thankfully, since we’re married, this photo is considered “community property.”

If you’re in the area, you can check out the new sign for yourself (but don’t go inside the fence!) as long as you practice social distancing!

Well, it’s official: Video Action is closed after around 33 years. I’d been a customer for most of them. When it was announced in mid-November, I had a mixed reaction: part remorse that we’d be losing Video Action, and part surprise that they’ve been able to hang on as the last remaining video rental business in town.

This is where we’d come for all the new releases. In fact, even before many of them would hit the now-popular streaming services, you could find them on shelves ready to rent. Lately, though, I’d find myself stopping in for older movies that are otherwise hard to find.

Once the decision to shut ‘er down was official, things began to go on sale. I walked out with a large stack of some of my favorite movies going back to the 90s or earlier, thrilled to own some of them but sad that they mean the end of an era.

I remember the first day that movies went on sale: it was a Sunday, so I went after church. The place was packed. New releases sold quickly, but I was looking for older treasures.

Before long, the shelves began to empty. Prices dropped, and even more movies found new homes – permanent homes, this time – as December 31st approached. The building had been sold, and during one of my repeat December visits, someone bought the OPEN sign from the window.

I shot a few panoramas for old time’s sake, as I’m sad to see this local landmark go. I’m a big movie fan, but I have to admit that even I had begun visiting the store much less frequently. We view movies differently now, with streaming services and Redbox taking aim at the traditional video store. The fact that we still had Video Action up until 2020 is a noteworthy achievement.

I didn’t know the saddest part of the story until recently: Don Loeks, the owner who founded Video Action in Bismarck and Fargo, passed away recently. I remember wondering if I’d see him during the last month of the store’s operation, but then I heard the news of his passing and it made the closing even more of a sad occasion.

You can read Don’s obituary here or here.

I’m thankful that we had Video Action for so long, thanks to Don’s passion for movies and games. It’s clear that this store was a labor of love for him, and his commitment to that brought a lot of joy to moviegoers in the Bismarck-Mandan area for over thirty years. He and Video Action will be missed.

I had some time to kill on a sunny day recently, and I went out roaming as I’m prone to do. I found this old red machine southeast of Bismarck, its boom reaching for the sky, and had to stop. I’d actually marked this particular piece of equipment in my GPS years ago – 2008, to be exact – but hadn’t come across the right conditions for a photo. This, however, was my day. The right sun, the right sky, and the beautiful green field came together to finally grant the photo I had in mind.

A friend from Pensacola and I recently took a trip up to Arena to check on the old church which has been the anchor of the town’s remains. While it still stands, technically, I think a more accurate term would be that it sits.

The concrete floor has finally given way, and the wooden braces have punched through. That allowed the entire building to shift backwards, which I believe is the only reason it’s still precariously upright.

As you can see here, the fact that the church pivoted back and onto the dirt behind the back wall is what has kept it upright after the failure of its supports.

Sadly, that’s also what is tearing this building in half. The front part of the church is separating due to the shift in the building and the lack of support beneath the area where the two parts join.

The front of the church is still being propped up by what’s left of the cinder block wall, but that isn’t going to last much longer.

The front of the church has also pulled away from the steps.

The steps themselves have begun to pull apart as well.

The back of the church looks okay at first glance, but you can see the extent of the damage at the front as the two parts of the structure are separated even further on the east side.

Naturally the chimney was an early causalty. I took this photo a long time ago.

So, sunset is on the way for this old church. It’s one of my favorite local photo spots, and it’s sad to see it go. Often when a building gets to this state of disrepair and instability, responsible parties destroy it before time does the inevitable. After all, it is unsafe. I’ve tried to stop by periodically to chronicle the demise of this beautiful little church, and I don’t care to imagine the day when it no longer remains.

This windmill southwest of the Bismarck-Mandan area doesn’t have much left but a skeleton. It sure is parked in a scenic location, however!

People make such a big deal about the Badlands, but if you haven’t roamed around southern Morton County you may not know that we have landscapes every bit as beautiful right in our midst. Those colorful hills and dramatic, eroded bluffs abound right in our own backyard. 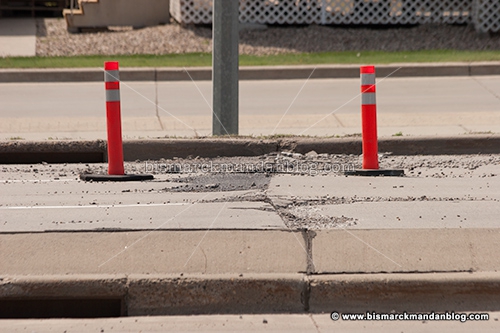 Looks like some stress relief was in order on State Street, between Liechty Homes and The Woodhouse.  I noticed this Saturday night as I came into town and found two lanes coned off and a police car directing traffic through the remaining lane.  Looks like there’s a new addition to the summer construction season “to do” list. 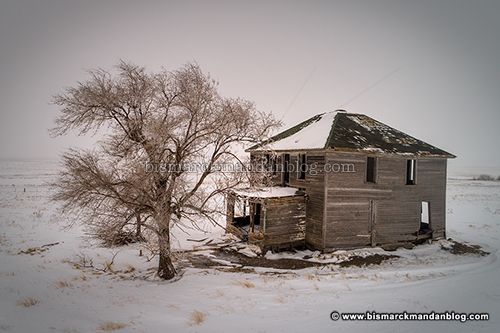 On a very white, overcast day recently I decided to pay a visit to an old friend, a house that I’ve liked to check in on frequently that isn’t too far from my property.  I took the opportunity to explore a few new angles, as I had some drone batteries I needed to run down to 50%. 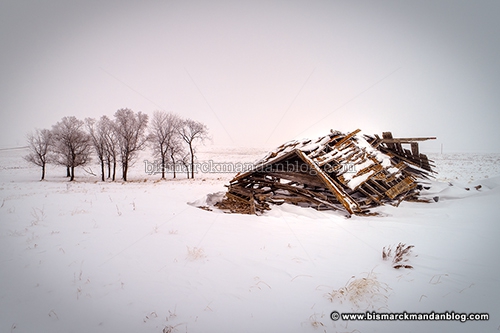 Since it’s already April, the bleak winter scenes are losing some of their appeal, but I was totally into it back when I flew to these shots.  Sometimes in the winter you get days where the air is just heavy – it’s like the entire outdoors is one giant soundproof room.  I love days like that.  They remind me of growing up in the Rockies where the mountains and their thick blanket of snow seem to absorb all the sound.  It’s so serene. 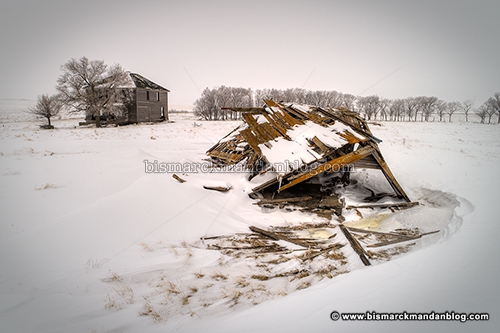 Of course, there was nothing serene about my propeller noise, but I did manage to enjoy the day anyway.  Coming home with some nice pictures to play with in Photoshop didn’t hurt, either!

Now I hope we can get to some green photos as quickly as possible.  With the snow gone, we’re left with brown grass and leafless trees.  This is why I prefer autumn in North Dakota to the spring; the weather is about the same, but in the fall we have green whereas in spring we’re stuck with brown.  Regardless, I look forward to the turning of the season.  It can’t happen quickly enough! 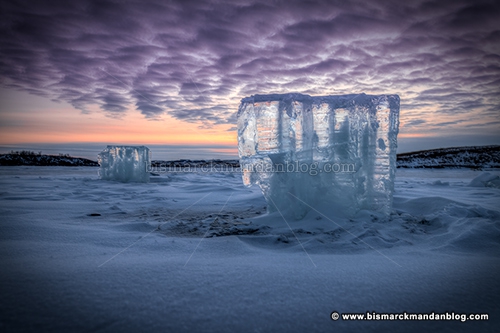 These ice blocks caught my friend Rich’s eye before they caught mine.  Thanks to him, I was able to pay them a visit after work today.  They sit in a conspicuous location, but I can only guess how they got there. 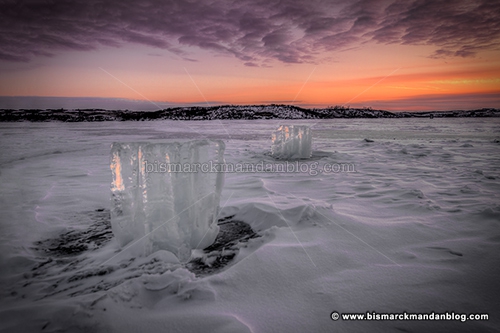 When I first arrived, I was afraid I wouldn’t have the skies I wanted.  And, while it’s true that the clouds overhead didn’t have any of the brilliant oranges blocked by clouds on the horizon, I still had some sweet clouds to work with. 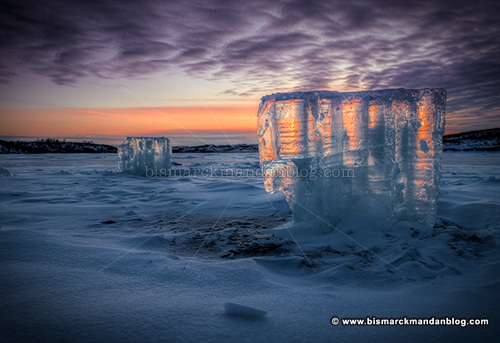 Bonus: I caught some of that color shining through the ice blocks.  I had to get to church, so I took off at the last possible moment…but I have a suspicion that going back with some different skies might yield an exciting result!

Be not affrighted: Ye seek Jesus of Nazareth, which was crucified: he is risen; he is not here: behold the place where they laid him.