If you’re a computer programmer or an accountant, you understand the title: Last In, First Out. This is probably the last autumn photo I’ll get this year, as the high winds which rolled in Wednesday morning are ripping the leaves off the trees as I type this.

Oddly enough, this year may be my best year for fall photos…ever. At least, so far. I’ve got a ton to post, and I’ll be trickling them out for a bit in the near future, but for now I just wanted to get this one out. It was a surprise I can’t believe I’ve never seen before, and I’m glad I got it…even with a cell phone. Not as good as my actual camera, but still a really nice shot.

We recently took a group to a range in South Dakota to shoot for Marksman and Sharpshooter badges, and while we were there I spotted something I just had to share. See it yet? If so, you’ve got a good eye.

END_OF_DOCUMENT_TOKEN_TO_BE_REPLACED

When we had a few days of spectacular frost (or Rime Ice, if you want to get technical) I was actually able to break away for a little bit and get my camera out!

I probably had my camera out of the bag more over the course of these four days than I did in all of 2020, so I’m pretty stoked to be able to present 109 edited photos of this phenomenon! And I’m going to continue to call it frost. The purists out there will have to concede that the difference between the two is in its formation, but the end result is the same: beauty.

See what I did there? Yeah, another dad joke. But I could stump you if I asked you where this is. Especially since it isn’t even in North Dakota! Thankfully I was able to get a break for some photography a while back. It’s taking me forever to get around to reviewing and posting the results, though!

Sadly, this autumn has been brief, cold, and gray…and I’ve been way too busy to get out.  But last year was perhaps the best photo fall I’ve ever had.  Worth reposting.  Six posts in all, I believe.  Here’s the first.

I took Monday off and roamed around a little bit with a shot list I’d been working on for a few days prior, and I must say I had a very fruitful time. While many of the shots I got have some lovely fall foliage in them, I haven’t taken the time to process those yet. I’ve got quite a backlog of photo and video work projects that I need to get done, so personal stuff is going to have to hold off for a bit. But I did manage to stop for some shots of trees along the way… 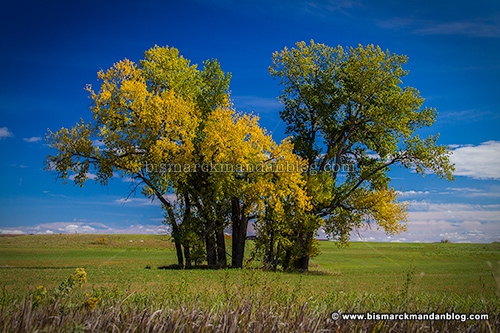 I love the gold and green here. Could have used a little red, but that’s going to be in Part Two of this little series. 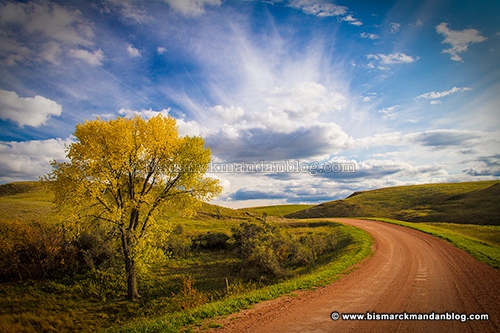 I nabbed a couple angles of this shot, one being behind this one a little way and illustrating the curve of the road differently. But I ultimately chose this one. I might have to take another look at the other shot for Part Two as well. 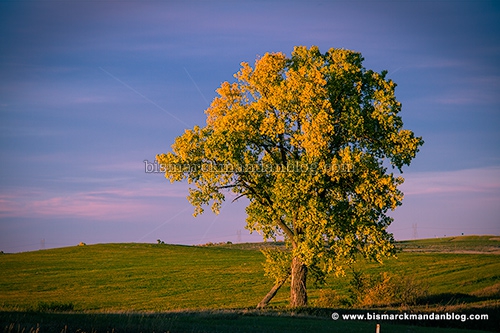 This had lots of green and lots of gold…but the setting sun made the green a little hard to pick out.

I have a few more coming, so stay tuned! 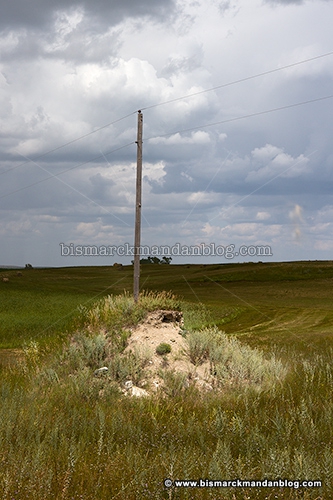 This is one pole who will not let six feet of erosion change the fact that these wires need to be held up.  I caught it right away as I rolled past.  It doesn’t show any sign of falling down on the job any time soon! 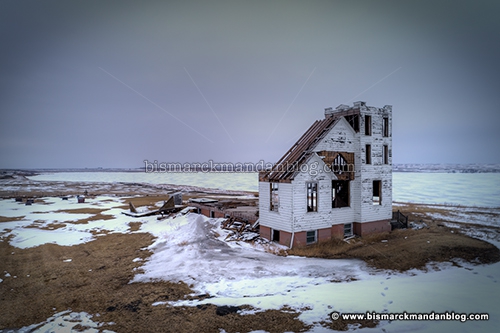 A friend of mine from Jamestown stopped in my studio a couple of weeks ago and told me about a really neat old church he’d passed on a road trip for work.  I didn’t know there was a church where he described it, and none of my resources showed it there, so I had to go check it out last weekend.  Here’s what’s left of it: Berlin Baptist Church. 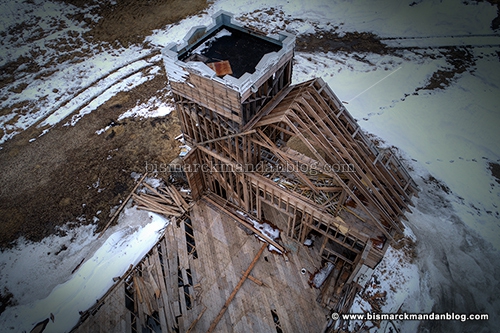 My urgency was because, once we located the spot on Google Earth, I could tell that the roof had been stripped and all the rafters were visible.  It wasn’t the kind of random thing that weather or time would do; this church was being dismantled.  To be honest, I didn’t even expect it to still be here. 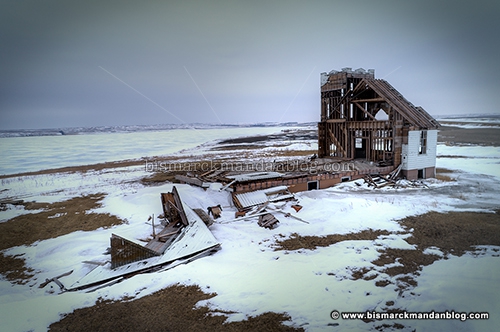 It looks to me like someone just plain ran out of time last year, and had to stop working on the structure.  The foundation and its windows are intact.  The floor is mostly intact as well.  The roof and walls have been removed up to the front portion of the church, where the balcony and steeple remain…for now. 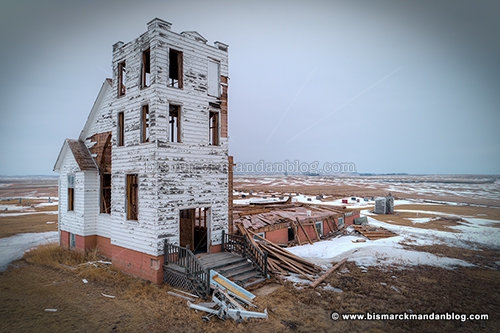 This was an amazing building…and wow, what a spot!  The cemetery is on the left of this photo, in the background to the north.  To the south is a large frozen lake.  I can only imagine what this place was like in its heyday. 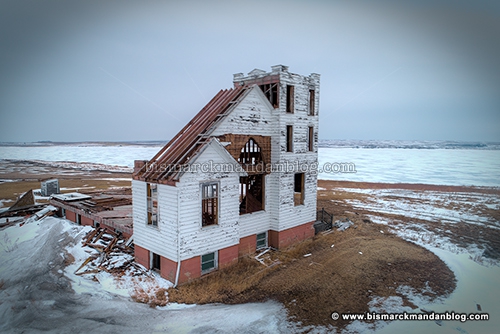 The frozen lake helped convey to me the bleak future for this old church.  It’s sad to see them go.  It isn’t that people quit going to church or abandoned their faith, but that so many small communities are fading away and smaller families mean fewer butts in the seats.  After a while, there aren’t enough people to keep even a small church going when you’re out on the prairie. 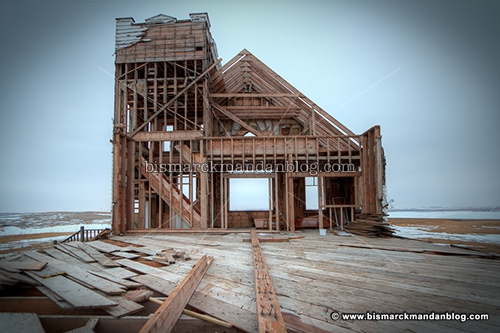 This was a soundly built church building.  I don’t normally crawl around or in old buildings I find, but I had to make an exception here.  Besides, it hadn’t reached this condition through deterioration.  It was still solid, just waiting to be parted out. 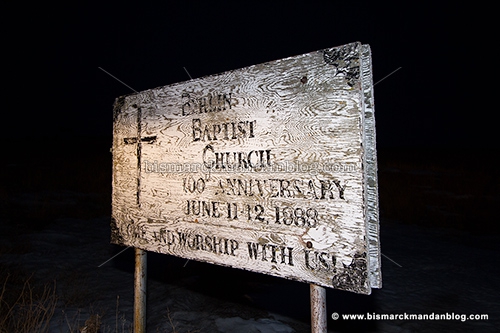 It got dark really fast while I was gaping in awe at this breathtaking find, so I didn’t get a chance to take a photo of the sign until I was on my way out.  The church celebrated its 100th anniversary in 1988, meaning it was here before the Dakotas achieved statehood.

I imagine I’ll have to check in on this magnificent church’s remains this spring before they vanish for good.  So many of my favorite prairie places are disappearing, so I’m always glad to know that I got photos of them before they faded into history.  I didn’t get to see this one before it was almost completely gone, but in its current state I think it tells a moving story. 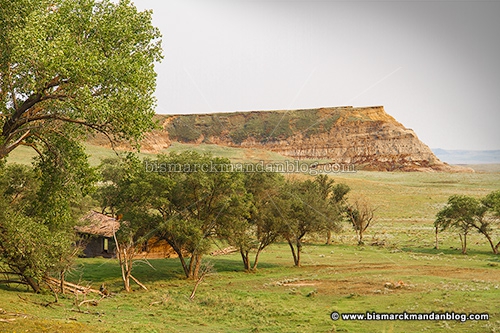 If you let yourself get distracted by that wonderful butte in the distance, or the view of the Missouri River valley past it, you might not even notice the little Fallen Farm tucked away in the trees on the lower left. 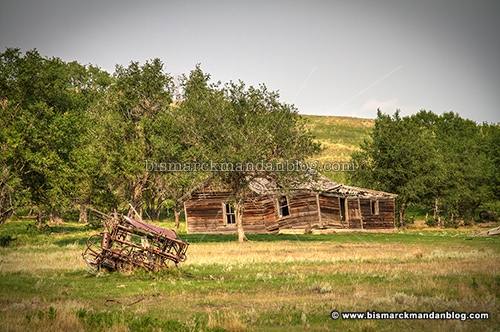 I haven’t asked for permission to enter this property yet, but it looks quite promising!  This is in a rather picturesque part of the county, where a guy with a camera could roam for a few days and not run out of ideas.  Although I may wish to wait until the snow melts next year before venturing off this way, even with my truck’s nigh invulnerability. 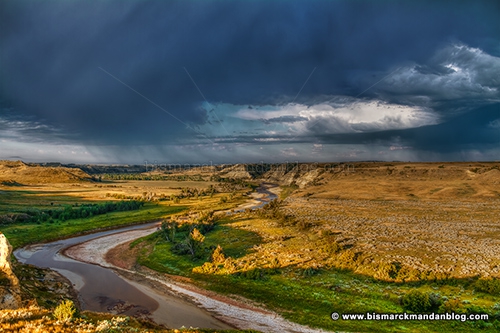 The last time I was in the Theodore Roosevelt National Park, I watched (and felt) a storm roll in while standing atop the Wind River Overlook.  I had trekked into the park before sunrise, getting one of my favorite sunrise photos EVER after slogging up the Little Missouri on foot for a ways, and was using my early-bird status to mosey around the park before the tourists arrived. 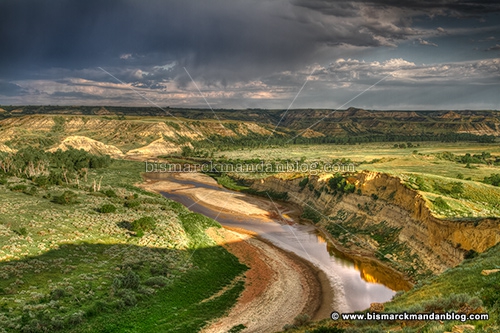 This area, while far different from the Rocky Mountains I enjoyed as a kid, makes me homesick for them nonetheless.  It seems that even in North Dakota the skies get bigger the further west you go.  I’d love to take a week or two and simply work the park, going back to Medora only for some shut-eye at night and fresh bacon in the morning!  Let’s put that on the bucket list. 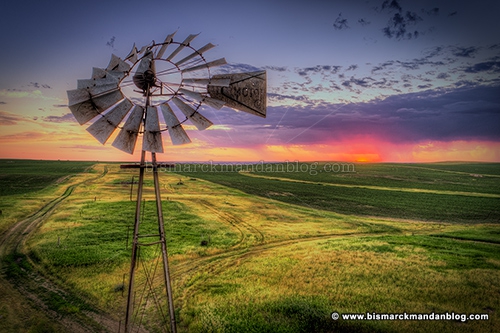 After getting way too deep into a maintenance project on my ATV and successfully reassembling it with no leftover parts, I decided to bolt up to a friend’s farm and try to catch a sunset.  The sky the evening before had been awash in beautiful purples and reds, which I witnessed while riding one of the motorcycles around the outskirts of town.  I figured there was a decent chance of some nice colors on this night, too.  I wasn’t disappointed. 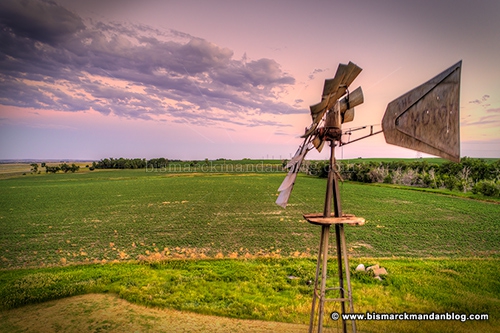 The reasonI chose to dash to this farm was the fact that the head of the windmill looked to have sustained some damage, and I wanted to photograph it before it got worse.  I’d had this farm in my GPS literally for years, but never actually asked if I could stop by some time.  I’m glad I picked this week to do it! 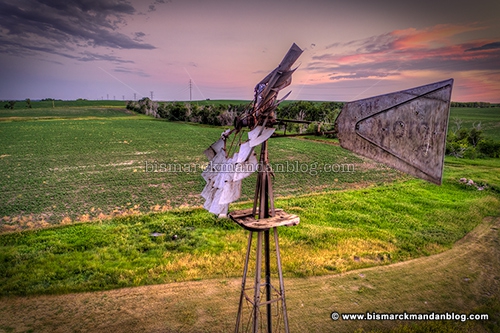 I got a little closer for this shot, but the wind was starting to pick up and cause all kinds of turbulence near the head of the windmill.  Things were starting to get rowdy up there, so I decided to play it safe and not fly any closer.

This was a fantastic photo trip!  The timing was right, I got to reconnect with a guy who I haven’t been able to chat with in a long time, the skies were good, and the windmill subject has unique character.  It will be repaired in the near future, too.  That’sgoodnews  ; too many of these old windmills that I’ve photograhed over the years are now gone.  I’m glad someone else sees their value and wants to preserve (and photograph) them!