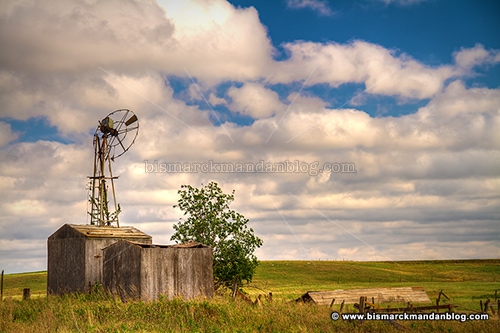 Shoegazing is a style of music from my beloved 1980s, basically because the artists would stare downward with appropriate angst while belting out their melodies on stage.  I could not ascertain what this windmill was focused on, but I doubt it had anything to do with Slowdive or My Bloody Valentine. 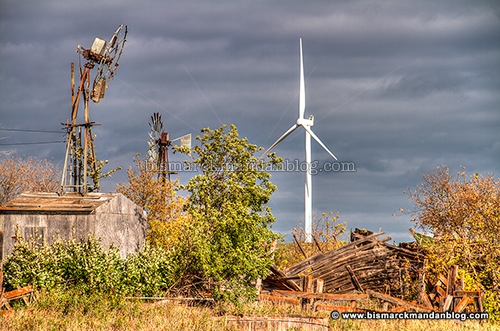 There are actually a few decrepit windmills in Bluegrass, ND, but the remnants of the little town are encroached upon by subsidy-sucking wind turbines on all sides.  I stopped to grab a quick old-vs-new shot during my most recent drive past the remains of this ghost town. 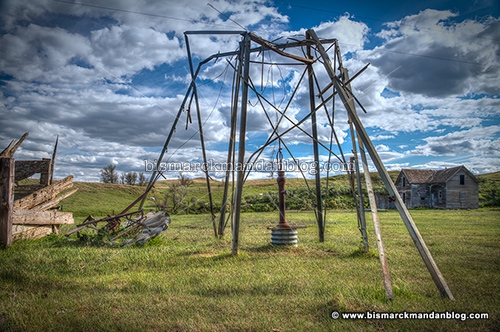 This windmill caught my attention while I was out roaming recently, and – unlike many of the windmills I encounter – it was actually near the road so I could quickly get a nice photo of it.  It seems these things are vanishing at a quickening pace; even ol’ standbys are falling to the ravages of time and North Dakota weather. 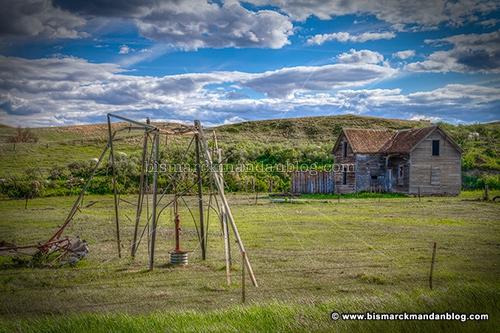 This one actually sits in a yard along with an old farmstead.  There are cattle on the land, which is probably why the lawn appears to be mowed.  It’s sad to see another casualty of time here, but fascinating nonetheless. 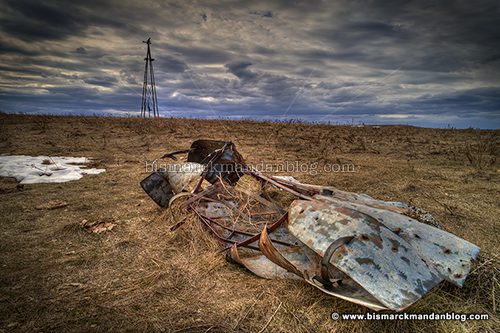 One more windmill in the casualty category.  This one actually isn’t too far from my property.  I took off a little early on Friday and roamed for an hour or so before finding this shot.  I’d played around in the river bottoms a bit, but didn’t find the inspiration I was looking for.  Thankfully I came upon this shot, although it’s too bad that the windmill is so badly damaged. 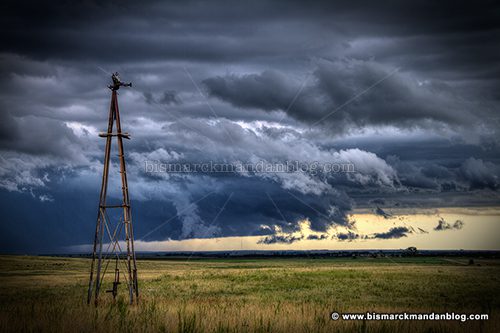 Yesterday’s storms missed my family’s abode, but they did cause plenty of excitement east of Bismarck-Mandan.  I took the opportunity to venture out with my boys and my new used truck to see what the clouds were doing.  Thankfully they obliged – I caught this shot not far northeast of Bismarck.  Wow.  I also got some cool video, but I don’t have time to post it just yet.  Maybe I’ll update the post later.

This old windmill, weathered as it is, has probably seen quite a few storms roll through.  It looks as though it’s probably been battered by them, too.  Is there any wonder why I’m so attracted to this feature of the North Dakota prairie?

It’s no secret that the photos have been fewer and farther between for quite some time now.  First I and every single member of our family had major health issues to deal with.  Then after we circled the wagons and worked on treatment and healing we took on building a new house, and still have lots of thing in bins and a new Garage Majal to get whipped into shape.  Additionally, my little kids have grown up to a point where they want more Dad time (not as much “Daddy”) and I’ve had a hectic freelance schedule.  Whew.

Well, I decided to knock off a little early on Friday and actually head out with my camera and some new gear I purchased with some of the aforementioned freelance money.  I didn’t want to make a major voyage out of it, but just work the outskirts of town and let the stress of the week melt away.  What better way to get back into the game than to go with my trademark: windmills!  I found a trio of ’em. 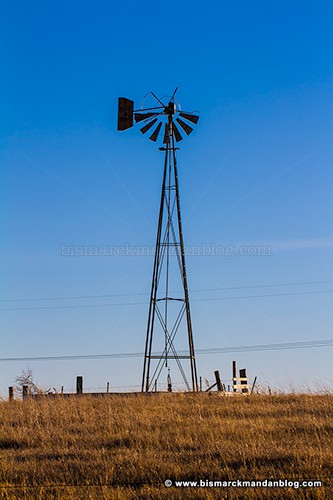 I have photographed these before, but they do change over time.  This one has lost more than half of the blades but is still standing tall.  I chose not to remove the power lines in the background this time. 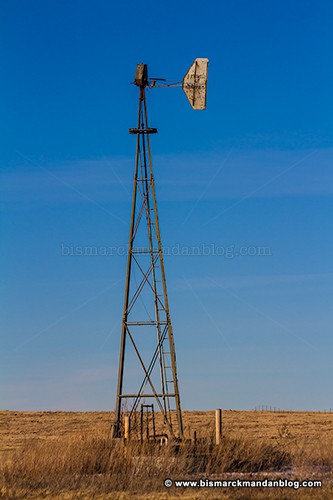 A wider shot may have portrayed this windmill standing alone in a vacant prairie better, but in reality there was a pole just out of the frame on the left where power comes in…presumably some sort of stock tank heater or something.  The lettering on the vane (yes, that’s what it’s called) says “R. R. HOWELL CO MINNEAPOLIS”.  It’s an interesting Google search if you have time on your hands. 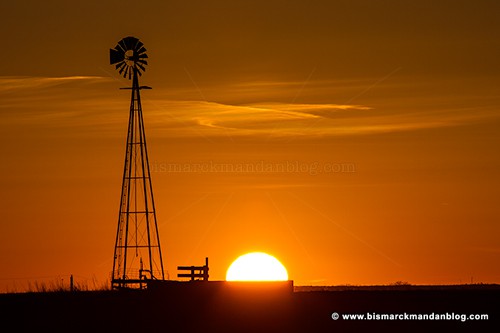 Sunset came quickly, and I once again cashed in on the real Secret of My Success when it comes to photography: being in the right place at the right time, often due to absolute blind luck.  I had a couple of minutes to wait for the sun to set in the silhouette of the water tank next to this windmill, adjusting my tripod to the side periodically to track the sun as it slid down and to the right of the frame.  The way it reflected off the wispy clouds above added to the feel of the shot.

It felt SO good to be out roaming again.  I didn’t even have a potential target when I set out; I just settled on windmills after coming upon the first one.  It was simply therepeutic to get out and start clicking photos again.  All the while I had a Nick Lowe song repeating in the back of my head:

I am determined for my own sanity to get out with my cameras more.  Maybe not as much as in the old days, because I want to be a good husband and dad.  Bringing the kids with on my photo trips will help, and maybe even kindle in them a love of roaming photography.  Meanwhile I hope to have more to share than simply political rants, which don’t take much road time at all.  Back to my love of North Dakota and sharing it online.  Maybe the next song going through my head will be Back in the Saddle Again! 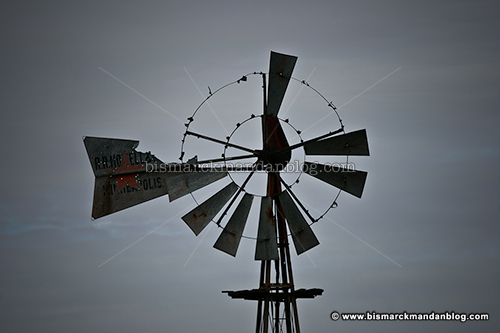 For a while, windmills ad nauseum could have been my motto.  Then I backed off for a while.  They’re still one of my favorite distinctive features of the North Dakota landscape, far better than oil field equipment.  This one has seen better days, but I think that adds to its charm.  The overcast day captured the mood nicely. 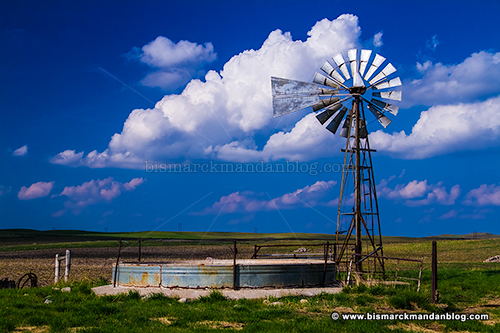 This goes out to my online pal Jason, who challenged me a while back to deliver a) a windmill photo, and b) a broken-down farm building photo.  What I haven’t posted, due to things being a little busy around here, are my responses – acquired on May 26th, 2014.

First, I’d like to present the windmill above.  This is one of my favorite windmills, but I didn’t just dart out to it in order to satisfy a request.  This was actually on the return leg of the previously posted trip with my little boys, when I had my youngest out southwest of Mandan.  In fact, I have already posted an additional windmill photo from that trip, the one with the damaged fins…but I’ve been meaning to share this one just because the colors were so dynamic. 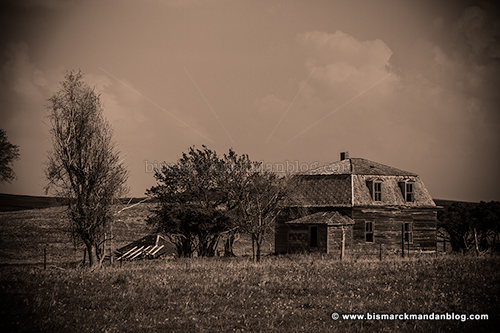 Next is this old house and the remains of its garage, which sit along the road to Fish Creek Dam.  That’s where I took my little guy to show him the bench out on the lookout point – if you don’t know about it, I’ll have to post a little explanation later.  I’ve wanted to approach this house for a while, and the land isn’t posted, but there are currently cattle on the land.  I guess I’ll have to wait, and let this shot from the road suffice for a while.

I’m on the mend now, and while I act as a recliner pilot and nurse the wounds from my most recent DaVinci robot attack, I’m going to try to dig back through the hard drive for shots like these.  I have dozens of photos I’ve taken with every intention of sharing here, but have somehow neglected or forgotten over time.  I think I’ll find some gems in there, and for the next few weeks I’ll have plenty of time on my hands to work with ’em. 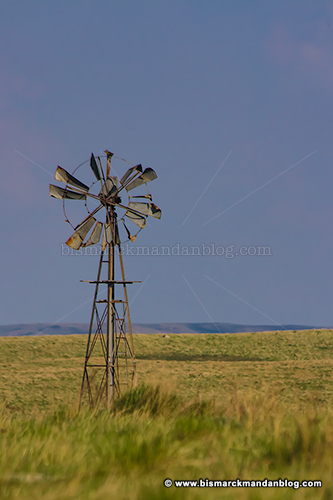 This Morton County windmill has seen better days.  I spotted it in this condition while driving by with my littlest boy.  He wanted to go home after a good afternoon of photo hunting, so I didn’t take the time to get any closer for a shot.  I switched to a 300mm lens and snapped this from the road, then took off for home (and dinner).

I’ve actually got this particular item marked in my GPS from before, and it seems to be deteriorating more rapidly than I remember.  I’ll have to make it back sometime soon, perhaps for a nice sunrise shot!  That is, after I get some of my things resolved… 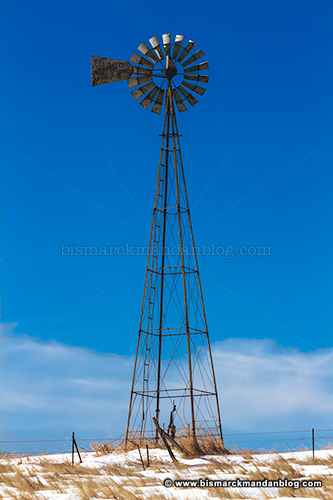 Yes, it’s been pretty darn cold.  Even many of my fellow North Dakotans are starting to whine instead of brag.  I did manage to get out for a brief photo trip the other day, and of course I had to go to an old standby: my favorite windmill. 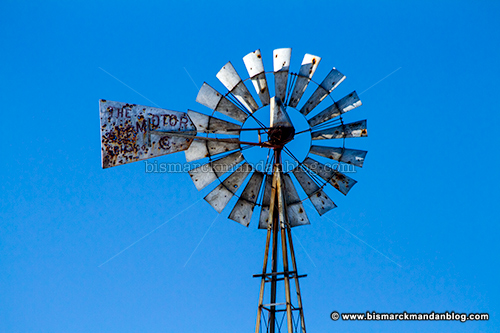 I haven’t been able to do much in the way of photography, which means long stretches in between blog posts and nothing but regurgitated political stuff on Facebook.  Sorry ’bout that.  I am hoping to stretch my legs more photographically here in the near future.  In the mean time, however, here’s some cold metal. 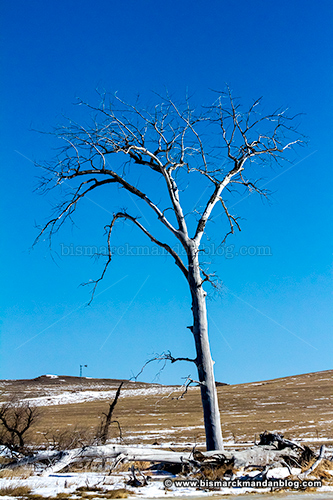 And some cold wood, I suppose.  Although, in order to maintain my self-deprecating joke about always photographing windmilss, I did manage to sneak one into the background.